The Skyline College Strategic Planning and Allocation of Resources Committee (SPARC) held its first meeting for Fall 2017 on Thursday, September 28, 2017.

Aaron McVean, Vice Chancellor of Educational Services and Planning, and Jacqueline Honda, Interim Dean of Planning, Research and Institutional Effectiveness, gave an update on the District Strategic Plan, which focuses on Students First, Student Success, Equity and Social Justice.  They shared the newly developed college metrics for measuring student success and completion.  A Task Force designed the targets to be aspirational yet also realistic.  The metrics were presented to the Board and can be found here:  http://www.skylinecollege.edu/sparc/assets/agendaminutes/2017-18/DSPMetricsGoals.pdf. The committee discussed the metrics and recommended adopting the goals to the College Governance Council for review.

Dean Honda shared the upcoming accreditation timetable with the committee.  The Accrediting Commission for Community and Junior Colleges (ACCJC) had recently undergone some changes.  One of the changes is the Self Study is expected to be written concisely and technically, no more than 100 pages compared to the prior one of 500 pages.  The projected timeline can be viewed here:  http://www.skylinecollege.edu/sparc/assets/agendaminutes/2017-18/AccreditationTimeline.pdf

The committee briefly reviewed the 2017-18 District Final Budget. The Budget details can be viewed at http://www.skylinecollege.edu/sparc/assets/agendaminutes/2017-18/2017-18DistrictFinalBudget.pdf

Eloisa Briones, Vice President of Administrative Services, shared the Adopted Budget for Skyline College. She noted the budget is based on 7,346 FTES and load of 525.  The FTES goal is an increase from the Tentative Budget of 7,242 FTES.  The total budget is $41,772,341.

The committee also received a report from Judy Hutchinson and Eloisa Briones on the first meeting of the District Committee on Budget and Finance.  Highlights included the San Mateo County Community College District 2017-18 Budget, OPEB and Retirement Trust fund information, Public Safety report as well as update colleges’ Promise programs.  All three colleges have implemented a Promise Scholars program.  The District has implemented of some of the 71 recommendations included in the Public Safety study conducted by consultants Margolis/Healy earlier this year.  The study as well as Management Recommendations will be released in the near future. 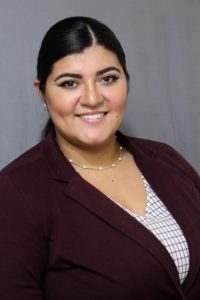 Please welcome Angelica Soria Mendoza to Skyline College.  Angelica will serve as the Office Assistant in the President’s Administrative Suite.  She comes to us from our sister colleges where she has served as an office assistant in the Center for Student Life and Leadership Development at Cañada College and the Language Arts Division at College of San Mateo.  Angelica holds an Associate Degree in Communications from Cañada College. She is currently a student at Notre Dame de Namur where she is completing a Bachelor of Science Degree in Business Administration.  Please extend our Skyline College welcome. 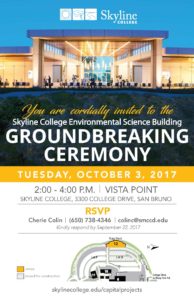 It is an exciting time at Skyline College, with the groundbreaking of the new Environmental Science Building overlooking the ocean scheduled for Tuesday, October 3, 2017 from 2:00 p.m. to 4:00 p.m.

The spectacular Environmental Science Building, the first building at Skyline College with a view of the Pacific, encourages us to look to the horizon and educate for the future, creating a shared locus for educational activity and community events.

The lecture halls will be able to host private seminars when not scheduled for academic use, classrooms will double as event spaces, and the gallery with its expansive views of the sea and coastline will support community and enterprise functions as well as student art displays.

For more information on the construction projects currently underway or planned on campus, visit skylinecollege.edu/capitalprojects.

We look forward to celebrating this milestone with each of you!

SMCCCD’s 2017 Annual Security Report (ASR), required by the Clery Act, includes statistics for the previous three years concerning reported crimes that occurred on campus; in certain off-campus buildings owned or controlled by SMCCCD; and on public property within, or immediately adjacent to and accessible from SMCCCD.  Our 2017 Annual Security Report also outlines various campus safety and security policies, such as those concerning crime reporting, prevention and response to sexual and gender violence, alcohol and drug use, crime prevention, emergency response and evacuation procedures and other matters.  The 2017 Annual Security Report also includes important tips to help every member of the community remain safe and avoid becoming a victim of crime.  The 2017 Annual Security Report is now available at https://www.smccd.edu/publicsafety/2017%20SMCCCD%20Annual%20Security%20Report.pdf.  You can also obtain a copy of this report by contacting the Department of Public Safety at the District Office or any of the three Campuses (650) 738-7000. 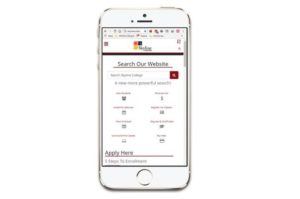 As a part of our overall Promise redesign, the Skyline College website launched a brand new search engine called FunnelBack, which provides students, faculty and staff a vastly improved search experience. With this search engine, the campus community will now be able to quickly and efficiently find and sort any information within our site.

The advanced search function allows students to filter by professor, degrees, pdf, class schedule, course number, phone number, etc. The best way to see everything the new search has to offer is to visit skylinecollege.edu and start using it. The more that people use the tool, the more data it will provide, which we can use to analyze trends and statistics on our website to customize the results, and ultimately provide a better, more cohesive experience to students.

The new homepage was designed to give students a better look into what the college has to offer by bringing the elements of the dropdown menu into the page, providing a more interactive experience with different communities within the college. We hope the brief descriptions will help increase the understanding of these programs, while the new placement will increase their visibility.

Lastly, we improved our mobile experience to meet the demands of a changing web landscape. Every year mobile devices account for an increasing amount of internet traffic. We want our website to reflect this change. We ultimately want our site to be as easy to use on a phone, as it is on a desktop computer. We still have a long way to go, and we appreciate any feedback you have on the new design as we continue on our journey to provide the best college experience for students. Please send any feedback to Brian Collins, Web Programmer Analyst.

With the FunnelBack implementation and new design, we are driving forward in our mission to enable students to find the materials and the resources they need to graduate on time and succeed in their educational pursuits.