by Becky Threewit on December 17, 2021 in Uncategorized • 0 Comments 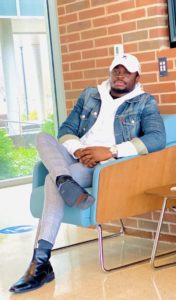 “Where I’m at right now… it wouldn’t have been possible if I hadn’t started my journey at Skyline [College],” says Franck Yao, Skyline College Alumni. Franck certainly has been successful since his time at Skyline College. He recently graduated from Elizabeth City State University, where he received a full-ride scholarship and is a new employee at Microsoft, which Franck enthusiastically calls “a great company.”

Franck is originally from the Ivory Coast. He first became interested in American education after participating in a leadership program run by the United States. “It was so great that I fell in love with it, and I decided to continue my studies in America.”

Skyline College first caught his attention at a promotional event in the Ivory Coast. He volunteered to help as a translator and “connected” with Skyline College staff. Afterward, he began considering studying at Skyline College. “They [the staff] were excited about it.” The Global Becca International Student Scholarship was another big reason why Franck came to Skyline College. After some pointers from staff, he earned the scholarship. “I would not have been able to pay for the tuition and fees if I didn’t get the scholarship.”

Franck says at Skyline College, “the support was great. It was amazing.” He says, “as an international student there are a whole bunch of regulations that are not easy to navigate… so if you don’t have a strong support system on campus … it can be very difficult, and that can impact your grades.” He also says the International Student Program at Skyline College helped the international students form a community, “we spend our time together, we eat together, do stuff together. It was fun.” In addition, Franck found a job at the campus bookstore that helped him pay for his bills.

Franck, a business administration major with a focus in economics, also found great teachers. He remembers his ESOL professor Serena Chu-Mraz particularly fondly “communication was a big challenge at the beginning… Serena made me feel comfortable and gave me tools and resources.” He is close with her to this day, “She’s still my mentor.”

He also remembers his economics professor, Masao Suzuki. Franck has a special interest in understanding resources, how they transform into something valuable, how they are managed, etc., and Professor Suzuki’s class helped him understand the basics. He was particularly interested in Professor Suzuki’s discussion of why capitalist and communist countries behave differently. Franck says, “If you pay attention and you listen, you really enjoy his class.”

Franck also took full advantage of the opportunities at Skyline College. He decided to become involved with the United Nations, an idea that went all the way to the College president, “she was super welcoming and excited about it.” As a result, Franck got the necessary resources to successfully apply as a Youth Ambassador for the UN’s Sustainable Development Goals Program. A position that led him to the UN’s Youth Assembly in New York. In the assembly, participants get a country to represent and a topic to focus on, “It’s like a full immersion in the real life of a real-world leader.” He says, “Resources are limited, and everyone wants to use them… If you don’t have a good negotiation skill, you will never get anything.”

He also joined the school’s robotics club, which welcomed him with open arms, “although I was not a STEM major, I jumped in. That’s another cool thing about Skyline [College] as well, there’s no crazy barriers to entry. If you’re interested and willing to try your best, you’re welcome.” He remembers fondly staying up until midnight experimenting and mixing things to see what stuck. One particularly memorable project was when the club created a solar boat from scratch. They won third at a state competition. Franck says, “The experience was good, the friendship was good.”

In addition, Franck spent much of his time helping others. He worked as a Student Ambassador for the International Student Program. Welcoming students and listening to their concerns, “My experience was so great that I wanted to be able to communicate that to the new international students right, especially the African students.” He also worked with the Washington Mandella Fellowship, a program where young African leaders come to the United States. Skyline College was a program host. Franck supported them and got to have new experiences of his own, “We went to Google, Twitter, Facebook, … it took us to many cool places that I would have never thought I would be.”

Franck says that Skyline College helped him build a strong “academic resume,” which helped him get a full-ride at Elizabeth City State University. When he interviewed for his scholarship, the Vice President told him, “I want you to come here and do all the things you were doing in California.” In addition, Skyline College’s academic program set him up for success, “at Elizabeth City [State University] I was on fire, and if it wasn’t for Skyline [College], I wouldn’t be able to do that.”