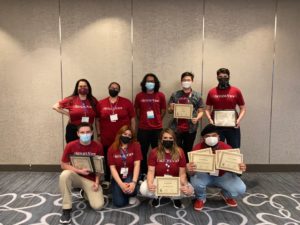 The Skyline View may be smaller this year, but it is still mighty, as evidenced by the clean-up they did at this year’s in-person Journalism Association of Community Colleges combined conference with the Associated Collegiate Press in Long Beach, CA from March 3-5. Joining forces for the first time face-to-face, the two organizations brought community college students from all over California together with two- and four-year schools from around the country for three days of keynote speakers, workshops, competitions and more.

Current opinions editor Zachary Navarra did what he does best and earned a second place in opinion story. The good fortune continued to new managers, sports editor Izzy Herrera (who also serves as Honor Society’s club president) and digital editor Adriana Hernandez, with the former earning an honorable mention for informational graphic and the latter getting an honorable mention for feature story.

But the news kept getting better throughout the weekend, when TSV was offered third place for best of show newspapers in the two-year colleges by the Associated Collegiate Press.

And because the JACC portion of the conference offered a variety of journalistic competitions, the eight attending TSVers had a chance to scoop up even more awards. First, copy editor Christian Ceguerra took fourth pace in news writing and a second place in Canva graphic. Then, opinions editor Zachary Navarra topped his previous award with a first place in opinion writing. Arts and entertainment editor Daniela Ossa earned an honorable mention in the social media contest, while Christian Ceguerra came back to collect a third place in feature writing. Ama Bayer, current photography editor, received an honorable mention in the video contest. Christian Ceguerra headed back to the podium to pick up his fourth award of the night, honorable mention in copy editing, only to be beaten out by classmate Steven Rissotto who earned first place. Rissotto rounded out the evening with another first-place award, this time for sports writing.

Admissions & Records is excited to share an improved process for contacting our office. Rather than a general email inbox, students and employees will be directed to fill out a Smartsheet Contact Form that will ensure that all basic information is provided at the onset, reducing the number of follow-up emails that are required. The Contact Form will also help Admissions & Records move more quickly to sort the type of questions students and employees have. The process will help shorten the time for students, faculty, and staff to get the information and assistance they need.

If you have any trouble with the form or have feedback that could help us further improve the new process for students, please share with Eric Torres, torreseric@smccd.edu, and Lauren Wagner, wagnerl@smccd.edu. 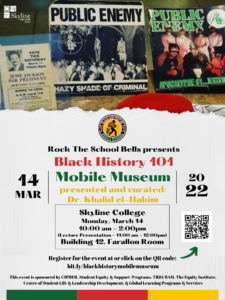 On Monday, March 14, the Black History Mobile Museum curated by Dr. Khalid el-Hakim will be making a stop at Skyline College as part of its nationwide traveling tour of over 100 colleges and universities. The CIPHER* Hip Hop Learning Community is hosting this event as part of their 15th Annual Rock The School Bells Hip Hop event series.

The exhibit of over 10,000 artifacts of Black memorabilia dating from the trans-Atlantic slave trade era to Hip Hop culture will be on display for viewing from 10:00 a.m. – 2:00 p.m. at the Farallon Room, Building 12 (Environmental Science).

Dr. el-Hakim will also be doing a presentation about the development and contents of the exhibit from 11:00 – 12:00 p.m.

To participate in this event, please register online at bit.ly/blackhistorymobilemuseum or scan the QR code on the flyer. In-person registration on the day of the event will also be available.

This event is organized in collaboration with Student Equity & Support Programs, the Center for Student Life and Leadership, TRiO, ASTEP/Umoja, Skyline College Outreach, and the Equity Institute.

MESA is Revitalized at Skyline College

On Wednesday, March 9, 2022, the reinvigorated MESA (Mathematics, Engineering, and Science Achievement) Center hosted an Open House event. Students participated in various social activities, explored academic and career opportunities with our newly appointed MESA Co-Directors Emilie Hein and Jing Folsom, and had the opportunity to connect with peers and other professionals in their field of interest.

The success of this Open House event was due, in large part, to the extensive outreach and networking done during Skyline College’s College Hour. Both events provided great opportunities for students to connect with our staff and learn about the MESA program, and the resources that it provides. .

MESA is a space supporting students who are currently taking courses in STEM-related fields. Located in Building 7, Room 7-309, it is surrounded by labs, staff/faculty offices, study spaces, and other resources; all instrumental in supporting student success and retention. Tutors are available for workshops and drop-in tutoring in coordination with professors for office hours and open labs.

By providing opportunities for students looking to get work experience, having a dedicated study center for support and building relationships, to academic and transfer counseling, MESA’s revitalization is another step and resource in that direction.

For more information about the MESA Program, please reach out to Co-Directors Jing Folsom (folsomj@smccd.edu) and Emilie Hein (heine@smccd.edu), or visit the website at: https://www.skylinecollege.edu/mesa/ 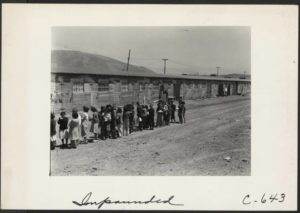 It was the first time anyone could recall the college tackling the topic of the WWII incarceration of Japanese and Japanese American citizens communally through an intergenerational event. Sociology Professor Rika Yonemura-Fabian moderated, drawing parallels to more recent tragic episodes of anti-Muslim and anti-Asian hate in our country. Many participants remained online well after the event had concluded to share stories and raise important questions.

Economics professor Masao Suzuki provided background on pre-war Japanese immigration and the roots of racism already grounded in American society before President Roosevelt’s Executive Order 9066 prompted the incarceration of more than 120,000 Japanese/Japanese Americans for the War’s duration. Professor Suzuki, who had done his PhD dissertation on this history and its aftermath, also shared family stories of resistance during the War, and spoke of the more recent Japanese American movements for redress and reparations during the 1980s.

Librarian Jessica Silver-Sharp shared historical photographs by professional photographer Dorothea Lange and others, with a focus on the Tanforan horse race track where more than 8,000 Japanese and Japanese Americans were incarcerated temporarily before their transfer to inland concentration camps. Images also portrayed Japanese American wartime resistance by the so-called “no-no boys” and draft resisters, conscientious objectors, and those who organized themselves into committees to protest conditions of their imprisonment.

Photography professor Arthur Takayama, born several years after the war, shared some of the few family memories that had been passed down by his Los Angeles relatives and the later impact incarceration had on them. He and other speakers noted that the Issei (first generation) and sometimes Nissei (second generations) of Japanese Americans experienced feelings of shame about the incarceration they were keener to forget than pass down as family history.

Mathematics professor Tadashi Tsuchida and his father Roy Tsuchida, who was incarcerated at the Poston, Arizona “War Relocation Center” at age 7 with his father and siblings, also spoke and showed family photographs. Prof. Tsuchida recalled that his grandmother, who was in poor health in 1941, was left behind in California and treated poorly at various hospitals. His father described watching his own father destroy their family photos and documents on the day Pearl Harbor was bombed. They spoke of the very poor conditions at Poston and how the inmates started schools there for the children, while prison staff ate the contents of the care packages they received (and flaunted it).

Participants posed questions for specific speakers and following the event, students completed assignments to reflect on what they had learned. Many reported having had little or no prior exposure to the topic. Many students whose family were immigrants from other countries made connections to their own family history – their own community’s struggles against prejudice and discrimination, and family separations due to governmental violence.

Jessica Silver-Sharp shared a Skyline College Library research guide for students and others as a starting place for better understanding this difficult time in our nation’s history: https://guides.skylinecollege.edu/JapaneseAmericanIncarceration

One salient question that was posed – “How do we make sure this does not happen again?” – brought home the need to continue teaching this history in order to avoid repeating it. Participants agreed that making “Remembering Resistance” a recurring event on the Skyline College scene would be beneficial to all.

Thanks to the many members of our community who organized and participated in this dynamic event. Anyone interested in collaborating to explore local aspects of the incarceration – such as the mostly forgotten Sharp Park Justice Department detention facility (now golf course) – please reach out to Prof. Rika Yonemura-Fabian <fabianr@smccd.edu>, Jessica Silver-Sharp <silversharpj@smccd.edu> or any of the other speakers. 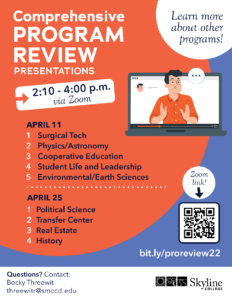 Join us via Zoom for Comprehensive Program Review Presentations on April 11 and April 25! Learn more about the following programs’ achievements, challenges, and plans moving forward, as well as opportunities to collaborate to achieve shared goals.