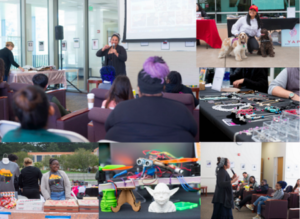 On Tuesday, students were invited to the multicultural center for some treats and a talk by from the founder of “Whipt” baked goods, Krizy Osada, as she spoke about her experience finding success through passion. Following her talk was a screening of “Piece by Piece”, a documentary about graffiti artwork in San Francisco.

To wrap up Business Expo Week, small businesses were invited to vend at the Skyline College Vendor Fair. Vendors ranged from clothing companies to artwork, food sales to pet supplies. Many of the vendors were Skyline College students who own and/or operate their own business.

This week would not have been possible without the support of the President’s Innovation Fund, the President’s Council, Dr. Regina Stanback-Stroud, Skyline Administration, and, of course, the students.