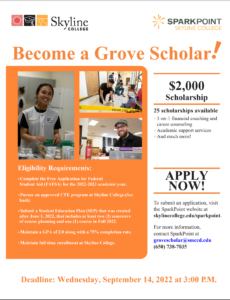 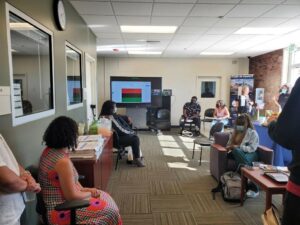 The Global Learning Programs and Services (GLPS) Division office in Building 19 bustled with activity on the afternoon of Wednesday, September 7, 2022, as around 25 guests consisting of students, faculty, staff and members of Skyline College and district leadership gathered for the hybrid Welcome Event organized by Umoja-ASTEP (African American Success Through Excellence and Persistence) in collaboration with Black Student Union (BSU).

The student attendees – a mix of Umoja-ASTEP alumni and returning and new Skyline College students, including an international student from Chad – enjoyed the company of Trustee Maurice Goodman who is himself an ASTEP alumnus, Student Trustee Lesley Ta, Skyline College President Dr. Melissa Moreno and Vice President of Instruction Dr. Vinicio Lopez.

Against the backdrop of this serious conversation, students enjoyed pizza, salad and strawberry lemonade while sharing what they looked forward to most and their expectations of Umoja-ASTEP, BSU, and Skyline College with each other and with distinguished guests.

Housed in the Global Learning Programs and Service Division, Umoja-ASTEP is a learning community and transfer support program that focuses on the African American community college experience through the nurturing of knowledge, intellect, academic exploration, cultural, and spiritual identities, gifts, values and practices.

To learn more and get involved with the BSU student club, please contact Aryssa Muhammad at skybsu@my.smccd.edu.

Having first formed in the spring of 2021, Skyline College’s nEXO group is now well into its second year of active hands-on research. It continues to make contributions to the development of nEXO, a 5-tonne liquid xenon detector for neutrinoless double beta decay. Last year’s nEXO student trainees, Shannon Hoang, Jiries Kaileh, Mimi McSwain, and Brendan Murtagh have now graduated from Skyline College and transferred to UC Berkeley (congratulations!!) and a fresh cohort of 4 new trainees is picking up from where they left off. This year’s Skyline College nEXO trainees are Sara Ellingsworth, Jonathan Mariano-Smith, Paul-Frederik Schubert, and Carol Sanders.

The Skyline College nEXO group’s summer started off with the nEXO Collaboration meeting, which took place at Stanford University from July 11 to July 15. This was the first time since the start of the COVID pandemic that the twice-annual meeting was held in person. It was a great way for the new trainees to meet nEXO collaborators, who had traveled from all over the world – from Canada to South Africa.

The new trainees also completed a series of technical workshops to gain necessary skills for completing their projects. They were introduced to Python programming, learned soldering from Jonathan, and learned 3D printing from Paul.

Sara’s individual projects include working with lasers and fiber optics. She is developing a graphical user interface to control the motion of an optical shutter that is part of a high-power laser system used to measure the electron lifetime in liquid xenon. Sara is also running an experiment to see if damaged optical fibers can be repaired using heat, and part of this work has her designing and building a special circuit that will control a UV light source for her experiment.  Sara will be presenting her work at the upcoming 2022 SACNAS National Diversity in STEM conference next month.

Jonathan and Paul are collaborating directly with Dr. Sander Breur and Dr. Brian Mong at SLAC National Accelerator Laboratory, aiding in the construction of a radon still, which is a device used to remove radon gas from liquid xenon. Radon removal is necessary because radon is a radioactive contaminant and a source of unwanted background signals in the nEXO experiment. Jonathan and Paul will develop a python GUI (Graphical User Interface) for taking active readings of temperature, pressure, and xenon levels within the radon still. When the GUI is complete, all of the collected data will be displayed in real time and will be accessible from anywhere on the planet!

Carol is currently working on an upgrade to the online waveform fitter program that is used with the Xenon Purity Monitor (XPM), a device at SLAC that measures the how the chemical purity of liquid xenon is affected by coming into contact with candidate materials for the nEXO detector. Certain materials, particularly plastics, are known to outgas volatile substances that contaminate the xenon, and the degree to which this contamination is happening is precisely what is assessed by the XPM.  Carol’s software upgrade is expected to make the xenon purity measurements more precise while also providing improved estimates of the associated statistical errors. Jonathan and Paul are also contributing to the XPM system with a special circuit board, designed by Jonathan, that will provide additional diagnostics of the cryogenic refrigerator that is responsible for keeping the liquid xenon in the XPM cold.  Jonathan’s circuit board will be mounted using a 3D printed holder designed by Paul.

In addition to the four official nEXO student trainees, there have also been major contributions from a few non-nEXO Skyline students who have done individual nEXO-related Honors Transfer Projects and/or independent studies. One such student was Anthony Tran, who worked with some of the new nEXO trainees over the summer on an independent study dealing with computerized analytical tools for working with XPM data.

The past year has been incredibly productive for the two nEXO co-PIs, Skyline physics professors Emilie Hein and Kolo Wamba. Not only did they see the first cohort of nEXO trainees meet all learning outcomes and successfully complete their traineeships, together with the rest of the nEXO collaboration they also published a scientific paper in the Journal of Instrumentation on a special new radioactivity calibration device for the nEXO detector. They have also been part of many important new DEI (Diversity Equity and Inclusion) initiatives. Prof. Hein led the creation of a nEXO DEI newsletter, and Prof. Wamba formed a special nEXO subcommittee tasked with evaluating DEI in authorship for nEXO’s peer-reviewed scientific publications.  In addition, Prof. Hein presented the work of the Skyline College nEXO group as part of a special DEI-focused minisymposium series at the Summer 2021 Low Energy Community Meeting and the Fall 2021 American Physics Society (APS) Division of Nuclear Physics (DNP) meeting, as did Prof. Wamba, at the April 2022 meeting of the American Physical Society (APS).

Next month, the Skyline College nEXO group will be represented at both the SACNAS NDiSTEM and the APS DNP meetings, which actually have conflicting schedules this year. Prof .Hein, Paul, and Jonathan will be accompanying Sara to SACNAS, and Prof. Wamba and Carol will attend APS DNP, where Prof. Wamba will give a talk on all the amazing things this year’s Skyline College nEXO group has done and is doing.

This work is supported by the DOE Office of Science (Office of Nuclear Physics). 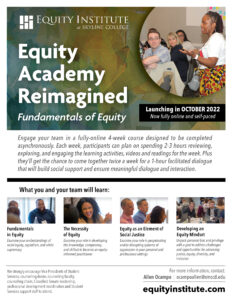 The Equity Institute of Skyline College is thrilled to announce the first level of the Equity Academy Reimagined launching in October 2022! The Equity Academy Level 1: Fundamentals of Equity is a fully online 4-week professional development opportunity for individuals and teams to baseline concepts, interrogate data and map implementation strategy to advance the equity-centered work at their respective institutions. The course is informed by anti-racist and anti-sexist pedagogies and practices rooted in social justice frameworks providing participants the opportunity to engage in facilitated activities and discussions.

The Equity Academy course is designed to be completed asynchronously, providing flexibility for working professionals to complete the training at their own convenience and pace. Each week, participants will spend 2-3 hours reviewing, exploring, and engaging the online learning activities, videos and readings for the week. They will also get the chance to come together virtually twice a week for a 1-hour facilitated dialogue that will build social support and ensure meaningful connection and interaction.

The Necessity for Equity

Equity as an Element of Social Justice

Once participants complete Level 1 of the Equity Academy, they will be able to enroll in the next levels of training. Level 2 focuses on developing an equity-mindset and strategic capacity, while Level 3 focuses on becoming an equity practitioner. Each respective level earns participants a certificate of completion to signify the authenticity and merit of their equity training as well as a digital badge that they can use on social media.

Additional details forthcoming, but feel free to contact ocampoallen@smccd.edu with any questions!