by Becky Threewit on October 15, 2021 in Uncategorized • 0 Comments 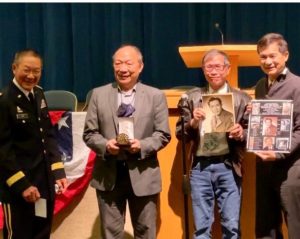 The Congressional Gold Medal, one of the two highest civilian awards in the United States, is one of “Congress’s highest expressions of national appreciation for distinguished achievements and contributions by people ‘who have performed an achievement that has an impact on American history and culture’.”

During Fleet Week in San Francisco,  a special Northern California presentation was held to award the Congressional Gold Medal to family members of Chinese-American World War II veterans from all the military branches.  Though belated, it represented recognition of the service and sacrifices of 20,000 Chinese Americans during World War II.

US Army Major General Stephen D. Tom (Ret.) presented the Congressional Gold Medal to History Professor James I. Wong and two of his brothers for their father, who had served with the famed Flying Tigers.  Bless Our Veterans!

← Puente Learning Community Students Challenge Themselves Together at the Ropes Course
Mindful Mondays is Back! →