by sneedb on September 5, 2019 in Uncategorized • 0 Comments 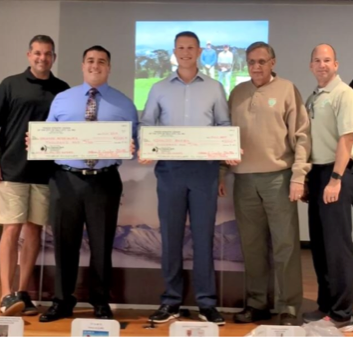 Skyline College Administration of Justice student, Orlando Rodriguez, was awarded a $2,000 scholarship on July 29, 2019 at the 2019 DC-PAL fundraiser banquet held at the Pomeroy Center in San Francisco. Orlando was recognized by the Daly City Police Department’s Police Athletic League (P.A.L.) Organization for his educational and community achievements while pursuing his career aspirations in the fields of law enforcement and criminal justice. A second award was made to Rolando Barba who is attending San Jose State University (SJSU).

The Daly City PAL, a partnership involving community leaders and the Daly City Police Department, is a volunteer organization dedicated to supporting, inspiring, and helping young people to become healthy, social, and caring individuals through athletics since 1957. ADMJ Professor, Steve Aurilio, and member of the Daly City PAL board instituted the Daly City PAL Educational Foundation (PAL-Ed) in 2007 as an auxiliary component of the PAL organization to help provide financial assistance to career-minded students who are interested in the justice field. This year’s is the fourteenth scholarship to be awarded to a Skyline College Administration of Justice student.

To qualify, students must be interested in a criminal justice career and either be a graduating high school senior or enrolled in a college Administration of Justice Studies Program.  They must also have a qualifying GPA, have performed community service work, and undergo an interview.