The Skyline College Marketing Team won Gold for the Brochure category and Silver for Logo Design at the 2022 Community College Public Relations Organization (CCPRO) Awards Annual Conference in Lake Tahoe held April 6-8, 2022, an event that celebrated the best marketing work of California’s 116 community colleges and 73 districts during the 2021 calendar year.

Cultural Identity and the Struggle to Belong

As a part of Stress Less week, Active Minds at Skyline College is bringing Active Minds National Speaker Javier Cabrera-Rosales to our campus to talk to us about his struggles with identity, cultural and generational norms, depression and substance abuse, and recovery and healing. Javier is a queer identifying Latinx male and is the Program Director for La Plaza: Nuestra Cultural Cura which focuses on promoting community, culture, and healing.

This event is being funded by the District’s Equal Employment Opportunity Community Diversity Project Grant.

Whether you’re interested in short- or long-term career planning, the Career Readiness & Job Placement team offers a variety of services and career readiness experiences to assist you with your specific career needs. If you want to work with a Job Placement Coordinator, please fill out this brief welcome form and someone will contact you soon to schedule an appointment! 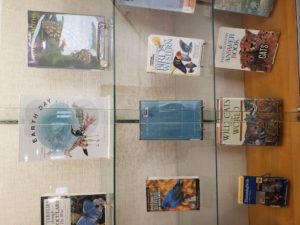 April 22, 2022 marks the 52st anniversary of Earth Day! This year’s theme is “Invest in our Planet.” The Library first began promoting Earth Day in its founding year, which was also the College’s first Spring semester back in 1970. In observance of this long held tradition, the Library invites you to “invest” by exploring up-to-date resources on sustainability and the environmental movement. These include a virtual book display with earth focused titles linked to the library catalog, and a second earth-themed display in the Library’s foyer featuring books chosen by first ever Guest Curator Jeneane, age 9, whose favorite earthly creature is the butterfly.

For students, a library research guide on the topic of Sustainability provides access to library article databases related to the green movement and sources in a range of formats to fit different learning styles. A second research guide is focused specifically on Earth Week. Faculty can also import the Library’s Canvas module Earth Day 21 into their course. It includes the short documentary Flint: Voices of a Poisoned City among other videos, articles, an assignment, and a Padlet activity, also available here: https://padlet.com/sanjyotpia/earthday2022. To import the Earth Day 21 module into Canvas, search for Earth Day 21 or Pia Walawalkar in Canvas Commons.

National Library Week took place earlier in April. (You may remember the Library’s old tradition of serving an enormous cake). For this occasion, our San Mateo County Poet Laureate Aileen Cassinetto invested in our planet by planting a tree to honor Skyline College Library! Ms. Cassinetto collaborates regularly with the Library for poetry events, providing support and encouragement for our brave student poets. The Library is grateful for her action on behalf of Mother Earth.

Questions? Need help? Drop us a note in the library chat service or reach out to Pia Walawalkar  at walawalkars@smccd.edu.

On Friday, March 18, 2022, the International Student Program (ISP) hosted a field trip to the Mission District, one of the oldest neighborhoods in San Francisco. The purpose of the event was to give students an opportunity to socialize and introduce them to the diverse culture of San Francisco. More than 20 international and domestic students joined the tour.

The tour started with Pancho Villa Taqueria, a Mexican restaurant famous for its Mission style burritos and large portions. For some students, it was their first time trying Mexican food.  The next stop was the Misión San Francisco de Asís, commonly known as the Mission Dolores Basilica. ISP counselor, Carlos Romero, who was born and raised in the Mission District, explained to the students that it is the oldest building in San Francisco. After a short walk from the Basilica the group enjoyed a picnic at Mission Dolores Park, one of San Francisco’s most popular green spaces. Students were impressed with the stunning views of San Francisco while they enjoyed meals from Pancho Villa Taqueria. 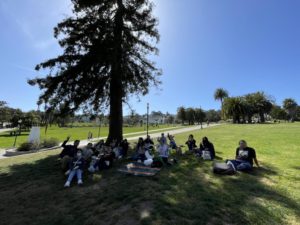 The tour continued to Clarion Alley Street Art which is renowned for its meaningful murals—many with political themes, all painted by local artists. The group also saw the famous Woman’s Building, a women-led community center that acts as a safe place for all the women around the world and focuses on women’s issues.

It was a perfect day for a walking tour and the students were able to learn about the rich culture of the Mission District. ISP will continue to provide services and programs for international students as well as for the entire Skyline College community. If you are interested in learning more about future ISP programs and events, contact ISP office at skyinternational@smccd.edu