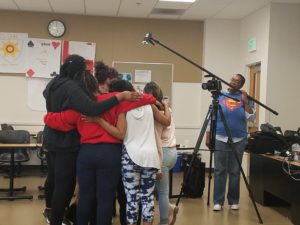 The Women’s Mentoring and Leadership Academy (WMLA) hosted its first ever short film festival in the Multicultural Hosting Gallery on May 18, 2018.

The film festival was a special project that was part of the COMM 160: Gender and Communication course that several of the women were enrolled in this semester. This project was the culmination of a 10-day film workshop called ActWrite, founded and led by Mrs. Teresa Dowell-Vest, MFA. Terésa Dowell-Vest is the founder of Diva Blue Productions and Publications, and is a Professor of Film and TV Production at Prairie View A and M University. She is a three time Geoffrey Award (Santa Monica Theatre Guild) winning director and a NAACP Theater Award nominee.

During the film festival, audience members were able to see short films starring WMLA participants that were written, directed and edited by students enrolled in the course, along with the assistance of Mrs. Dowell-Vest. All of the films highlighted experiences, issues and challenges that many of the women face in everyday life. Some of the films were comedic in nature and others were more serious, highlighting issues impacting women that were discussed during class sessions. The 10-day workshop included four days of writing and editing stories into film scripts, three days of acting and filming, then finally two days of editing and producing films. The final day of the workshop included the presentation of the short-films to the campus community. The film festival line-up included:

Several other women in WMLA wrote scripts as well, but due to time constraints they weren’t able to be included in this year’s film festival.

WMLA thanks Mrs. Terésa Dowell-Vest for her talent, and her guidance, wisdom and humor throughout the project. We also would like to thank Board of Trustee member, Maurice Goodman, Vice President of Administrative Services, Eloisa Briones, Grace Beltran, Jessica Hurless, Martina Center-Goodman, Lucia Lachmayr, Carlos Romero, and members of Brothers Achieving Milestones for their support during the film festival.