by fitzpatrickc on August 25, 2017 in Uncategorized • 0 Comments 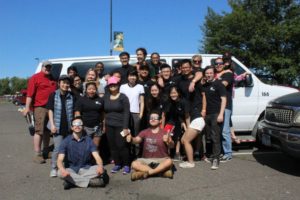 Dr. Nick Kapp and Marco Wehrfritz from the SMT division secured funding from the President’s Innovation Fund to travel to the Linn Benton Community College in Albany/Oregon in order to view the eclipse. They were joined by IT specialist Jairo Barreto and instructional technologist Allison Hughes who helped with the live streaming of the event. The group was also supported by guest scientist Dr. Daria Genzel-Wehrfritz, who demonstrated how research on bats is performed during the evenings.

A group of fifteen students currently studying biology and engineering were chosen on a first come first serve basis, and demand was exceptional. A small group of five students who couldn’t get one of the 15 available seats in the vans even rented a car and drove all the way up on their own to meet with us and celebrate the eclipse together!

The expedition started on Saturday, August 19, with Lake Siskyou at Mt. Shasta as the first destination. The group spent the night in tents and after getting up early on the second day they drove the rest of the distance to the Linn Benton Community College (LBCC) in Albany.

LBCC transformed their soccer field into a campground for the eclipse fans. On the day of the eclipse, everyone was excited and got ready for the experience and for taking their measurements, then right after the eclipse was over, the group jumped in the vans and drove all the way back to Skyline College. 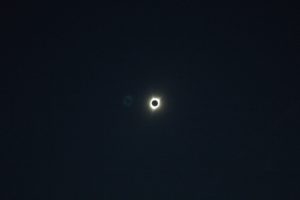 In order to study the gases present in the corona of the Sun, students used a self-constructed spectrometer to measure the wavelengths of light being emitted by the supercharged gasses of the corona as seen during the eclipse. The spectrometer can capture the wavelengths of ultraviolet lights and the unique color combination produced by the gaseous emission spectrum. From the formation to the end of eclipse, the spectrometer was directed at the sun while it captured the most prominent wavelengths emanating from the Sun. The results included the documentation of the light intensity drastically decreasing as the Sun became eclipsed as well as the capture of the hydrogen emission spectrum. The most prominent spectrum found had a distinguishable combination of red, green and blue light that can be identified as hydrogen. Because the gases on the sun is dominated by 70% hydrogen, the data was a reflection of this ratio as the emission spectrum of hydrogen was documented throughout the entirety of the study. The study using a spectrometer helped students become more familiar with the characteristics of the sun and how wavelengths of light work.  This work will confirm the first observation of Helium by scientist during the eclipse of 1868.

On our way to Oregon the students captured several yeast samples in order to cultivate them here in the Bioengineering Lab at Skyline College. There are various yeast cultures spread over the country, all with different properties. After cultivating and investigating them, students will learn more about this. In addition to the yeast the students also collected several samples of plants following the spirit of the first explorers of our environment.

This adventure lasted for three days and amongst all the experiments and studious activity, students were given the opportunity to enjoy a change in scenery from laboratories to the dense forest near Mt. Shasta. For some, the outdoor experience was foreign but soon became thrilling. Students set up tents, swam in Lake Siskiyou, and bonded over late-night snacks by the campfire. Everyone helped to prepare the food with guidance of Star-Chef Dr. Kapp with his super bbq and cooking skills.

The eclipse inspired and implanted a sense of awe and mystery in the students as they witnessed the moon slowly hide the sun from view. As the light of day changed from one of harsh bright, white light to a deep blue twilight, the energy of the students and everyone present mounted until cheers erupted as the eclipse reached totality. There was a sense of calm and tranquility as the audience gazed upon the eclipse, but excitement still buzzed through the air. For all who participated in the trip and those watching back home, the mystery of the eclipse brought anticipation and an eagerness to learn more about the science behind this phenomenon. The community participated in the delight as people began to read into the history of the eclipse and add to the growing excitement. Students on the expedition carried the excitement of their college on their shoulders as they conducted experiments and brought home experiences to share. It was a great and unique experience for all participants.

Thank you to the President’s Innovation Fund for making this possible!