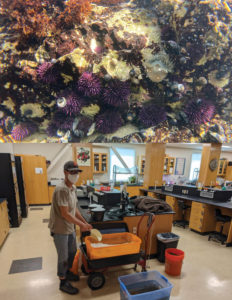 Bottom photo: Chris Duran after collecting sea water and seaweed to feed purple urchins to be used in the lab. With Chris’ care, the urchins were used for several labs instead of rush ordering them for only one lab.

Each semester, BIOL 215 students are tasked with the responsibility to raise and observe model organisms as part of their class. From yeast to crabs to mice and fish, these model organisms are key to research and are used in multiple class labs. Because of this, many of the organisms used in the lab require extra hours and work to ensure their survival for the rest of the class to use.

Biology student Chris Duran took this a step further to care for the urchin shipment delivered to the lab. He has had personal interactions with them before (collecting some from a local beach under his fishing license), and thought it would be fun to research and observe urchins for his model organism project. He was able to use this expertise to assist during the lab and outside the class.

When asked, he describes this as “an opportunity to go and learn more about the ecosystem and animals in our coastal ecosystems” while spending more time at the beach and intertidals. Between “connecting biological concepts and what is learned in lecture to the hands-on approach to learning, it reinstills why these concepts we learn are a thing through these demonstrations in and out of the lab”.

These hands-on projects can be credited towards the supportive atmosphere brought about by the instructors and PI’s, who demonstrate enthusiasm for biology. Many in the class Duran was in, agreed that the support they received helped in understanding more of the basis of biology and were able to come out of the class better equipped to care for terrestrial and aquatic organisms.

Moving forward, the department hopes to be able to expand their support for students who seek to research model organisms. This would include the application of a scientific collecting permit, in order to bring in local organisms into the lab for further research.

For more information about starting your own research project, ask your STEM instructor about the possibility of doing a special project, or see the STEM Research club advisor, Nick Kapp (kapp@smccd.edu) or STEM Center Program Services Coordinator, Bryan Swartout (swartoutb@smccd.edu). The STEM Division works to support and facilitate interactions with other students, researchers and involvement on campus.