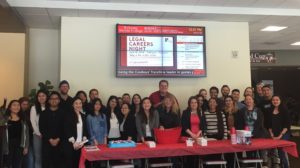 5 students presented their research projects to the campus community at the annual Skyline College Science Research Symposium that took place on April 27. Participants included students from the Biology Department, Biotechnology Department, Math Department, Physics Department, Energize Colleges internship program, and Engineering and Robotics Club. A list of students and their projects is below.

The symposium offered students the opportunity to gain valuable experience communicating their original research and recommendations both orally and through designing coherent, eye-catching posters. “A very real part of our students’ education is getting up in front of a crowd and explaining a scientific concept,” says Biotechnology professor and event organizer Nick Kapp. “The Skyline College Research Symposium gives our students the opportunity to do this for the first time in a safe environment. Many of them will go on to bigger venues at regional and national conferences. I would like to think that by giving our students this opportunity, Skyline College is making a contribution to the knowledge of all mankind.”

In addition, the event served as an occasion for building community among members of different campus departments. Kapp believes it was important for students who presented their research to also be a part of the audience and ask relevant questions. Students got to learn from and support other students, celebrating their hard work with a cake and ice cream social at the symposium’s end.

Article and Photo by Mary Thomasmeyer