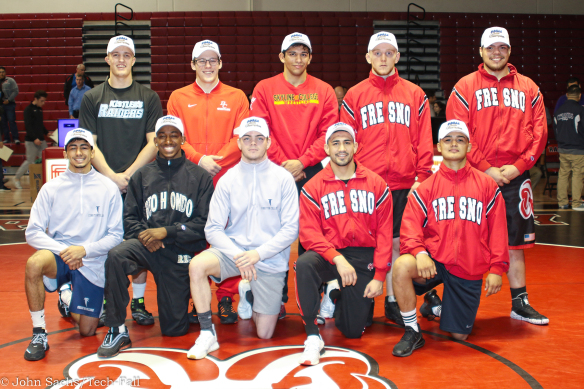 Skyline College’s Stephen Martin was crowned as the top wrestler in the state of California in the 184 pound weight division at the California Community College Athletic Association State Championship on Saturday, December 14, 2019 at Fresno City College.

Martin, a sophomore, cruised through the quarter and semi-final on Friday and Saturday winning his matches by scores of 6-0 and 6-1. Using a methodical approach in the championship match, he opened with a first period takedown and rode Jacob Annis, of Bakersfield College, the final 2:15 of the period. With Annis choosing neutral to start the second period, the two looked to see who would get the next advantage, with Martin securing another takedown with 37 seconds left in the period. Stephen ended the match strongly with another late takedown for the shutout win.

Stephen Martin became the first Skyline College state champion in wrestling since 2000 and just the fifth in school history. His aggregate score of 20-1 demonstrated his dominance of the 184 pound weight division. Martin’s performance carried the Skyline College team to a 16th place finish overall in the championships.

Congratulations to Stephen, his teammates and Coach Haddon and his assistants on an outstanding season!