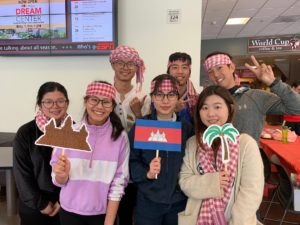 Students gathered at the Fireside Dining Room and were introduced to traditional Cambodian clothes, food, language and a game. The crowd was invited to learn how Cambodians wore traditional scarves and encouraged to take photos after dressing up in the scarves. They were also treated to a taste of Cambodia in the form of charbroiled beef with peanut sauce,cucumber salad and black sticky rice with fresh mango. These delicacies were definitely a crowd favorite!

The event also showcased a traditional Cambodian boardgame, Klah Klok. People were invited to guess which images would appear on dice and win delicious South East Asian candy in return.

The event was well-attended, and everyone went away with a little bit of Cambodian culture with them in the form of their names in Khmer, photos, candy or food in their belly!

ISP’s next event, Global Extravaganza, will be held on April 30, 2019 in the Quad. Look out for Taiko drummers and the opportunity to learn more about the various international cultures that are represented here at Skyline College!