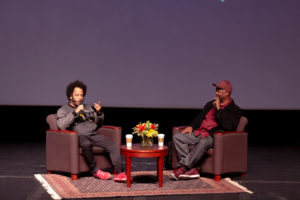 On October 18, 2018, Skyline College hosted a film screening and a discussion of the film, Sorry to Bother You (STBY) with Filmmaker Boots Riley and Hip-Hop Journalist and Professor David “Davey D” Cook. This program was sponsored by the Division of Student Equity and Support Programs, The Center for Career and Workforce Programs, and Changing the Face of Entrepreneurship. The program opened with remarks with Dean Lasana Hotep followed by Katrina Pantig, who introduced the guest speakers to the stage.

Sorry to Bother You (STBY) is a dark comedy that takes place in Oakland, California and it offers a critique of capitalism and racism in America. The film premiered at the Sundance Film Festival and received positive reviews from media critics and audiences nationwide. STBY was Boots Riley’s directorial film debut for which he was nominated “Breakthrough Director” by the Gotham Independent Film Awards. Prior to directing, Boots Riley was the founding member and lead vocalist for the political hip hop group, The Coup. He also founded the Rap and Rock group, the Street Sweeper Social Club and led movements as a Community Organizer.

The program format consisted of a screening of four different film clips with discussion in between. Riley talked about how growing up in a socially and politically conscious household and exposure to drama, music, films and performances influenced his desire to pursue a degree in Film at San Francisco State University. His experience in the music industry and community organizing informed his vision and equipped him with skills necessary to produce a successful film.

Riley shared the importance of being able to be a visionary leader, collaborating with others and being prepared to oversee the creative process. Boots said, “Everything that you do whether it’s making a song, throwing a party, organizing an event, rally or a campaign—a lot of it has to do with working with people and getting across a shared vision and idea.”

Davey D and Boots Riley also engaged the audience in a question and answer segment and Riley was presented with an original art piece from student leaders. The main program was followed by a luncheon with students from the Changing the Face of Entrepreneurship Program, Student Equity and Support Programs and the CIPHER Learning Community. Melissa Matthews, Faculty Coordinator for the Disability Resource Center stated, “Sorry to Bother You made an impression on me when I saw it this summer. I appreciated Boots’ insights as an activist and a leader. I was inspired and it was a great opportunity for our students, the next generation of artists, leaders and activist here at Skyline to be inspired as well.”