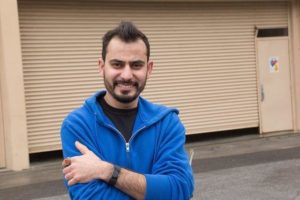 Ahmed Abushawareeb is an international student from Palestine, and an alumnus of Skyline College. He earned his Technician and Automotive Technology Associate Degrees in the fall 2017 semester.

Ahmed has always loved working on cars and machines. He was even told by some of his professors that he has the gift of “speaking” to cars. After graduating from Skyline College, Ahmed applied for jobs at BMW and TESLA. To his surprise, he received offers from both!

He stated that it was a hard decision to make, but he decided to join TESLA. Ahmed has always been committed to preserving the earth’s resources. With TESLA being an alternate fuel company that is committed to developing sustainable energy sources, Ahmed knew that was the best option for him.

Ahmed has big dreams for his future. He plans to gain experience for a year at TESLA and then further his education in either Mechanical or Electrical Engineering at San Jose State University. He still hopes to continue with TESLA through an internship while he studies and then be a full time engineer with the company once he receives his Bachelor’s Degree.

“I am a determined person so when I get something in my head, I keep doing my best until I get it.” Ahmed said. We look forward to seeing where his passion and determination takes him in the future.