by Becky Threewit on September 2, 2021 in Uncategorized • 0 Comments 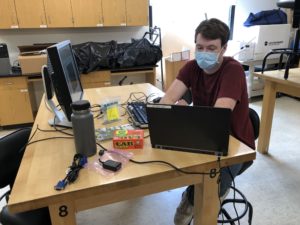 nEXO stands for the next-generation Enriched Xenon Observatory for double beta decay.  It is an international nuclear physics experiment designed to search for an extremely rare form of radioactivity. The nEXO collaboration consists of over 150 scientists at 35 institutions in nine countries, among them Stanford University and the SLAC National Accelerator Laboratory. The special form of radioactivity that nEXO will search for is called neutrinoless double-beta decay, and the search will take place using a common isotope of xenon. Xenon, like neon, is part of the family of chemical elements in the periodic table that we call noble gases. Neutrinoless double-beta decay has never been observed, and if discovered would represent revolutionary new physics with the potential to provide many important insights into the fundamental nature of our Universe.

Earlier this year, Skyline College’s physics department, led by Prof Emilie Hein and Prof Kolo Wamba, formally became a part of nEXO and was awarded a grant by the US Department of Energy’s Office of Science to participate in this research. This award has made it possible for Skyline College to partner with Stanford University and SLAC and to take on four amazing student trainees who are now contributing to the ongoing detector R&D activities for nEXO. In initiating the program, Profs Wamba and Hein have also partnered with Fabrication and Physics Lab Coordinator Marco Wehrfritz, who has played a major role in supporting the nEXO trainees.  He has provided lab equipment and software, and organized and led an extremely successful soldering workshop for the students. This year’s nEXO student trainees are Shannon Hoang, Jiries Kaileh, Madeleine McSwain, and Brendan Murtagh.

Shannon Hoang is an Environmental/Energy Engineering student. This summer she has worked on special hardware to support one of the nEXO detector subsystems currently under development at SLAC. SLAC scientist Dr. Brian Mong provided much of the equipment along with helpful advice for Shannon’s project. Throughout the academic year she will continue to take on various other projects at SLAC and Stanford as they come up.

Jiries Kaileh is a Computer Science student. His nEXO project is called the “Analog Discovery 2 Synchronization and Triggering Project.” It consists of a study that is vital to scaling the measurements of neutrinoless double beta decay events within the nEXO detector. He has been working closely with Stanford Postdoc Evan James Angelico, who has been an invaluable source of mentoring and advice.

Brendan Murtagh is a Physics student. He has been working on testing ways to restore the performance of optical fibers used on the Xenon Purity Monitor (XPM) at SLAC. Over the summer he finished the preparations for the experiment and is now working on data collection and analysis.

An important goal for this project is to increase the number of students from underrepresented populations who choose to pursue graduate studies in nuclear physics. The Skyline College trainees are currently the only Community College students who are part of  nEXO. This unique approach to diversifying the field was presented at this year’s Low Energy Community Meeting (LECM). Additionally, mentors and trainees have become active members of the nEXO Diversity, Equity, and Inclusion Committee, chaired by Dr Sander Breur and Dr Erica Caden, and whose priorities are to increase diversity in physical science and engineering by fostering an inclusive, equitable environment within nEXO.

The nEXO trainees have done amazing work this summer that they will continue throughout the year. They are excited to share their work with the community and will be presenting at a Science in Action Seminar this semester.

This work has benefited from important contributions from both within and outside of Skyline College. Dean Carla Grandy has been a strong supporter of the project since its inception. The Skyline College nEXO group would also like to acknowledge SLAC scientist Dr Lisa Kaufman, for giving Prof Wamba the idea to introduce Skyline College to nEXO, and Stanford physics Prof Giorgio Gratta, from whom Prof Wamba first learned about the US Department of Energy’s “Research Traineeships to Broaden and Diversify Nuclear Physics” grant program. We would also like to thank SLAC scientist Dr Peter Rowson for hosting our team at SLAC and for being a great mentor to Prof Wamba and our students. Finally, the group of graduate students and postdoctoral scholars at SLAC and Stanford have also been incredibly valuable in helping to mentor the Skyline nEXO trainees.

This work is supported by the DOE Office of Science (Office of Nuclear Physics).

If you have any questions, please feel free to reach out to Professor Emilie Hein (heine@smccd.edu) and Professor Kolo Wamba (wambak@smccd.edu).

← Skyline College Music, Drama, and Dance take us to URINETOWN
Workshops at the BAEC! →