Skyline College Music, Drama, and Dance take us to URINETOWN

by Becky Threewit on September 2, 2021 in Uncategorized • 0 Comments 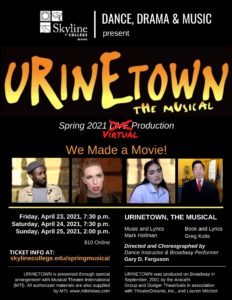 When faced with the real possibility of cancelling this tradition as we began the 2020-2021 academic year, the production team – Gary Ferguson (Director and Dance Instructor), Jude Navari (Music Director and Music Instructor), and Josh Harris (Technical Director and Theater Manager) – jumped into action.

“Several theatrical rights organizations … made the performance rights for plays and musicals available for streaming performances as live performance venues continue to be closed during the COVID-19 pandemic,” Navari said.  The team chose URINETOWN as the Spring Musical 2021 for its Brechtian style. This style of theatre features actors ‘breaking the fourth wall’ by directly speaking to the audience as well as the use of minimal set and props. These were features that they thought would work well in the Zoom-filmed video medium.  Cast members recorded their singing parts asynchronously through an online, web-based DAW program in which they were followed guide tracks prepared by staff accompanist Margaret Fondbertasse. Then, these tracks were mixed together and combined with video recordings from live Zoom sessions in which the cast acted and danced. The show was a presentation of the ‘movie’ that they made together from these performances.

“You can’t use up creativity. The more the you use, the more you have.” – Maya Angelou

Producing and performing a new musical each year is already a monumental task that requires gobs of creativity to combine music, drama, and dance into a seamless whole.  The endeavor is made all the more difficult when directors and performers cannot be in the same physical space. With enthusiasm and energy, the directors, cast, and crew worked together to find new ways to tell a story working in a virtual environment. Their efforts were evident in the final show, truly embodying the statement “you can’t use up creativity”.

Dancer and Choreographer Twyla Tharp once said that “Art is the only way to ‘run away’ without leaving home.”  In creating a virtual URINETOWN, the Spring Musical team showed a way to create theatrical art and help people ‘run away’ even when they can’t leave home. For two laugh-filled hours, the audience joined the cast as they pondered through music and satire, “What is URINETOWN, where the poor are sent if they can’t or won’t pay to pee?”

More than 125 attendees viewed the Skyline College Spring Musical 2021.  Technology Distribution Coordinator and Music Instructional Aide Pedro Gomez shared, “I am amazed at the talent and courage on display in putting together such a successful online performance of Urinetown!

My hats off to the cast and crew that had the courage and talent to put together a musical in the age of COVID-19.”

We look forward to seeing how the lessons learned from virtual theater inform the return of live theater in 2022!