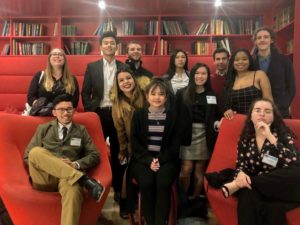 During the weekend of February 28, 21019 through March 3, 2019, the Skyline College Model United Nations (MUN) team participated in the UCBMUN XXIII Model UN conference at the Hilton hotel in San Francisco, CA.

Skyline College MUN is a parliamentary debate team that competes against other universities at regional conferences where they attempt to solve global issues in the style of the United Nations. Committees include crisis, specialized, general assembly formats, and discussion topics range from historical scenarios to the most recent current events.

The UCBMUN XXIII conference featured teams from all over the world, including prestigious universities like UCLA, UC Berkeley, USC and Stanford University. Delegations from universities in Russia, Africa and the West Point military academy provided unique perspectives on the issues in their committees. The best delegate in each committee is awarded the gavel in the closing ceremony after the final session of debate. While the Skyline College MUN team didn’t bring home any gavels from this conference, each member of the delegation had the opportunity to contribute to the flow of debate and to learn from their colleagues from other schools.

The club’s agenda for the rest of the 2019 semester includes preparing for another competitive debate season next year, recruiting new members, as well as hosting a Skyline College Invitational MUN conference at the end of the school year.