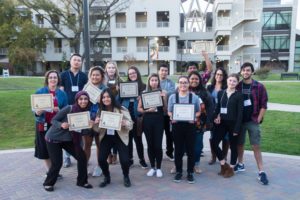 Beyond the contests and awards, the attendees were treated to a keynote address from StudioToBe founder Joaquin Alvarado, and numerous workshops in such topics as data journalism, social media, sports writing and internships. Students also had a chance to talk to representatives from several CSU journalism programs.