by fitzpatrickc on August 17, 2017 in Uncategorized • 0 Comments 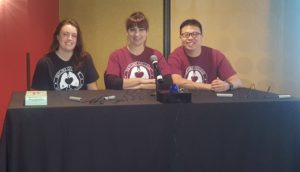 Eighteen respiratory care program teams from across the State of California participated in the event. Teams included students from both first and second year. During the competition teams were supported by their classmates who cheered from the crowed. Skyline College had two teams; one named “Chicken Nut Bread” (a hilarious acronym for “she cannot breathe”) and the other named “Some Full Cup.” Chicken Nut Bread made it to all the way to the final round and was awarded 2nd place team in the competition.

Dean Ray Hernandez, Dr. Ijaz Ahmed and Professor Brian Daniel were present and graciously supported the teams. The Skyline College program and students were recognized for their participation and contributions during this event. The students demonstrated their knowledge, hard work, and expertise in their profession.

Congratulations to both teams, all the Respiratory Care program students, and Skyline College for a great job.