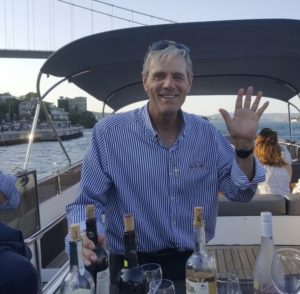 After 81 semesters teaching and coaching in the Kinesiology Department at Skyline College,

Professor Mike Fitzgerald is retiring from his full-time position.

Coach Fitzgerald was also instrumental in creating and running the nationally-recognized Physical Fitness Testing Program at the college, personally testing over 15,000 students during this time.  He was recognized nationally within the United States Professional Tennis Association, winning the Northern California Seminar Contest 5 times and finishing 5th in the nation in 2008.  Mike Fitzgerald has been inducted into both the City of Pacifica and Skyline College Hall of Fame as a result of these accomplishments.

Coach Fitzgerald plans on returning to teaching part-time after a semester off from Skyline.

“I still have a passion for teaching, and after spending 44 years of my life at Skyline it is hard to say good-bye.”

Mike is a born-again Christian and plans on spending time with his wife, twin sons, daughter-in-laws and five grandchildren.