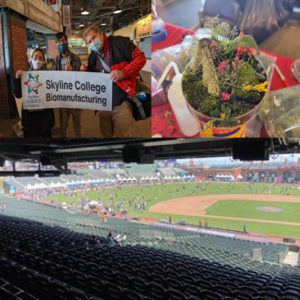 Professors Jing Folsom and Nick Kapp’s Biomanufacturing Club students presented at the Bay Area Science Festival held at Oracle Park on April 24, 2022.   Students attending included Jonathan Zhang, Johnathan Der, Azure Bell, Shirley Luong and Chuyun Wang.  The Bay Area Science festival is an annual event where local universities, colleges, companies and nonprofits put on a technology demonstration to entice youth to go into STEM, inspire curiosity, and convey basic science principles.  Skyline College Biomanufacturing worked for 2 weeks to develop a scientific demonstration activity that included local moss, a moss bioreactor and some of local snails. The event was expected to attract over 25 thousand visitors and about 9 thousand walked by the Skyline College booth. Students worked hard to explain the life cycle of moss and what a moss bioreactor is to over 400 kids and their parents in the 5 hours that they had the booth. Azure Bell says that the event “went well and kids really enjoyed being able to hold the snails with gloves on and being able to construct a moss terrarium using the snails.”

Both professors and students hope to showcase more scientific discoveries and bring more fun to youth in the next Bay Area Science Festival.