by Becky Threewit on February 19, 2021 in Uncategorized • 0 Comments 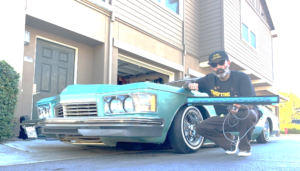 Though Professor John Ulloa’s days are spent teaching History and Cultural Anthropology at Skyline College in the world of academia, he is also an integral member and advocate of the international Lowrider community. As a native of Modesto, California and eventual owner of six different lowriders, Ulloa began “cruising” at age 16 when he bought his first Lowrider, a ‘65 Impala Station Wagon. From that moment forward, Ulloa’s passion for the sociocultural history of Lowrider, personal experiences, and research positioned him as a thoughtful and informative Conference Co-Chair of the 1st Annual International Lowrider Studies Conference held on January 29, 2021.

As an event centered around storytelling and lived experiences, the 1st Annual International Lowrider Studies Conference organized by lowrider clubs, members, youth, and formerly incarcerated people throughout the world, presented an encouraging place of appreciation for Lowrider culture.

Throughout the conference, Ulloa and other speakers shared information and anecdotes about Lowrider history. Spanning from cultural to political issues; discussions of justice, community, style, geography, art, music, and fashion were only some of the many topics presented while exploring this cultural phenomenon in a global context. Professor Ulloa presented Bouncing Across Borders: The Globalization of Lowriding in addition to acting as co-chair; while in the spirit of unpacking the politics of gender, award-winning Lowrider scholar, filmmaker, and media creative Gloria Moran’s presentation, provided feminist commentary through critical analysis on the erasure of women’s labor in lowrider and lowriding spaces.

Through his research, Ulloa is able to examine the global diffusion of lowriding culture from the Mexican-American barrios to various countries outside of the United States including Japan, Brazil, Australia, New Zealand, Guam, Saudi Arabia, and several other countries. The Lowrider scene in Nagoya, Japan serves as one example of this global cultural exchange. Beginning in the 1980’s, a man named Junichi Shimodaira traveled from Nagoya to Los Angeles to better immerse himself and understand Chicano culture, practices, and aesthetics; and bring what he learned back to Japan.

“In [Nagoya], Japan, they are heavily influenced by 70’s style Lowriding… And the reference there are old Cheech and Chong movies: Up in Smoke, Nice Dreams, and Next Movie. You’ll see the true Spokes, the Cragar wheels, the Appliance wheels. They came over here and they were buying all of those 70s style wheels which are now worth their weight in gold, but at that time nobody wanted them. That is why you see, in Nagoya in particular, that 70s style influence,” Ulloa said.

Prior to acting as conference co-chair of the 1st Annual International Lowrider Studies Conference, Professor Ulloa presented the Opening Ceremony Seminar at The Lowrider Experience at CSU San Marcos in 2018 and was a curator for the Skyline College Art Gallery’s Lowride Worldwide Exhibit in 2017. Additionally, Ulloa led a Study Abroad course in Cuba from 2015 to 2017 organized by the district Study Abroad Program.  He remains active in the Bay Area lowriding community.

For more information about the 1st Annual International Lowrider Studies Conference and links to conference presentations go to:  https://savethekidsgroup.org/jan-29-2021-1st-annual-international-lowrider-studies-conference/