Jazz Band To Perform in Half Moon Bay

by fitzpatrickc on October 19, 2018 in Uncategorized • 0 Comments 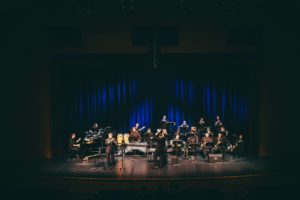 On Saturday, October 20, the 24-piece Skyline College Jazz Band will return to Odd Fellows Hall in Half Moon Bay, a venue that has enthusiastically hosted and promoted the ensemble several times in the past three years.

Celebrating the 50th anniversary of the iconic Bay Area band TOWER OF POWER, the Skyline College Jazz Band will perform soul and funk classics including, “There Is Only So Much Oil in the Ground,” “So Very Hard To Go,” “You’re Still a Young Man,” “Diggin’ on James Brown,” “Down to the Night Club,” and “What Is Hip?” among other swing, blues, and Latin musical selections written by eminent jazz composers Michel Camilo, Gordon Goodwin, Lennie Niehaus, and Maria Schneider.

Led by Professor Zack Bruno, the Skyline College Jazz Band is comprised of full- and part-time student musicians who meet for rehearsals in the MUS. 450 class on Monday nights. The Jazz Band learns and performs a new program of music twice each semester, often showcasing their talents at jazz clubs in San Francisco, San Carlos, Burlingame, and Daly City.

The Odd Fellows Hall in Half Moon Bay is located at 526 Main Street, and the concert begins at 7:30 p.m. The suggested donation for admission to the performance is $20 ($10 for students). Proceeds go toward scholarships for music students in the Cabrillo Unified School District.

In addition, the Skyline College Jazz Combo – a select group of musicians from within the Jazz Band – will perform at the Cañada College President’s Luncheon on Tuesday, October 23, at the Hiller Aviation Museum in San Carlos. The Jazz Combo was featured earlier this year at the Skyline College International Student Orientation, at a private home in Atherton, and at the SMCCD Foundation’s Golf Fundraiser in Palo Alto.