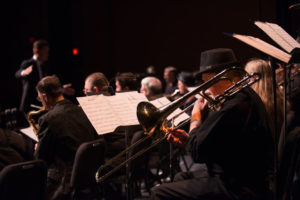 In celebration of the St. Patrick’s Day holiday, Skyline College’s Jazz Band sought the proverbial pot of gold at the end of the rainbow by performing songs that included the colors of the rainbow. Count Basie’s “Kid from Red Bank,” Nat King Cole’s “Orange-Colored Sky,” Frank Sinatra’s “Yellow Days,” and a tribute to Oscar Peterson called “On Green Dolphin Street” were among the color-themed selections, as well as the Judy Garland classic “Over the Rainbow.”

The final piece on the program brought the Skyline College and El Camino High School student musicians on stage together for a joint performance of Tito Puente and Arturo Sandoval’s “Mambo Caliente.”

On Friday, April 26, at 7:30 p.m., the Skyline College Concert Band will host the famed Golden West Winds from the Travis Air Force Base Band (Fairfield, CA) for a concert titled “Part of Your World.” Music from composers all over the world and inspired by several regions including Andalusia, Serbia, the Caribbean, and Israel will be featured. A medley of tunes from Disney’s The Little Mermaid will conclude the evening.

← The Skyline View Wins Awards at State 2019 and for Website
Women in STEM: Skyline College Faculty Members Share Their Experience With Over 150 Students →