by Becky Threewit on November 19, 2021 in Uncategorized • 0 Comments 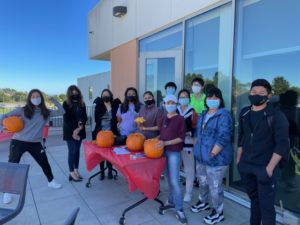 The International Student Program (ISP) provided its students an opportunity to socialize and learn about yet another American tradition – Pumpkin Carving! For many, this was their first time participating in the pumpkin carving tradition. Lynn Kyaw, an international student who had never carved a pumpkin before, said, “it was very very cool.”

There was a lot of socialization. Lynn had become friends with some of his group members in class but never met them in person. Mowen Tan, another international student, got to work with all new people. She called the event, “a good way to meet some new friends.” There was a surprise visit of Skyline College President, Dr. Melissa Moreno, too!

In the end, both students would do it again. Lynn is especially enthusiastic. After seeing ISP staff in their costumes, he thinks that if there is a similar event next year, the students “need to plan for the costumes… I plan to wear [a] Black Panther Costume.” He also plans on getting photographs.

← Real Conversations in Real Time: The Human Library Offers Authentic Connections across the Globe
Poetry Corner Cultivates Community through the Language(s) of Poetry →