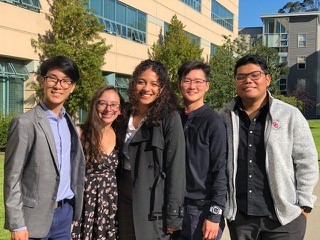 This past weekend Skyline College’s Forensic team competed in the Golden Gate Season Opener tournament that spanned over the course of three consecutive days. 23 schools from across the Bay Area, Southern California, Oregon and Nevada participated in one of the largest intercollegiate speech and debate tournaments hosted by San Francisco State University. Students had the opportunity to showcase talents in over 15 different categories of speech and debate events. The community welcomed the Skyline College Forensic team with open arms and are excited to add an additional school to the Northern California Forensics Association.

On Friday and Saturday, Trojans competed in team debate (NPDA). The team of Isabella Perez and Joedel Penaranda competed in five preliminary rounds. The team of Benjamen Gao and Zane Chang advanced to elimination rounds and finished the tournament as finalists, taking 1st place in the novice parliamentary debate category. Benjamen Gao finished in the top 10 speakers for the novice division placing 3rd.

On Sunday, two students Dianne Argueta and Eduardo Unisa competed in Individual Events (speech). Both students competed in Impromptu. This event students are given a random prompt or quotation and have two minutes to prepare a five minute speech. This is not an easy task.

Traditionally tournaments will hand out actual medals and trophies, but SFSU awards students with succulents and plants. They put an emphasis on sustainability and attempting to limit plastic consumption and waste. The succulents represent growth in many ways. Students who compete in forensics are pushed to expand research, analytical, and performative skills and due to this foundational structure students in turn “grow”. The plant awards are a physical reminder of how we should strive to grow: our minds, skill sets and potentially change the way see concepts or ideas through participatory discourse.

I would like to take the time recognize Skyline College faculty who came out to support not only Skyline College but who continue to foster growth within the larger Forensics community: Dean Chris Gibson, Communication Studies Professors Joann Babin and Sage Russo. Thank you for your support at GGO.

Students will be traveling to University of Nevada Reno to compete in the “Biggest Little City Classic” mid October. Wish us luck as we continue to “lay down our roots”!

← SMCCCD Study Abroad Offers Advising for Applying to the Benjamin A. Gilman International Scholarship
Middle College Back to School Night →