by Marie Kyla Perez on December 5, 2019 in Uncategorized • 0 Comments 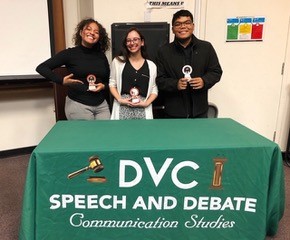 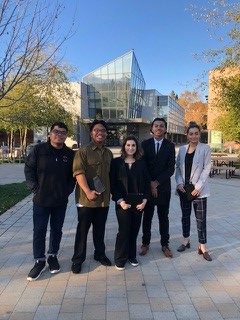 On November 22 – 24, 2019, Skyline College’s Forensic team competed in the Valley to Valley tournament that spanned over the course of three consecutive days. 18 schools from across the Bay Area, Southern California and Illinois participated in the second inaugural tournament held at Diablo Valley College. Students had the opportunity to showcase talents in over 15 different categories of speech and debate events.

On Friday, November 22, Trojans competed in individual debate (IPDA). All three students (pictured right) who entered in this event advanced to final rounds. Joedel Penaranda competed in five rounds of IPDA ultimately earning him a Bronze medal. Dianne Argueta and Isabella Perez competed in six back-to-back rounds over the span of eight hours, finishing the tournament both earning silver awards. Participating in debate at this level of competition not only takes knowledge and technical skills but endurance!

If you are interested in joining the speech and debate team consider enrolling in COMM 172: Forensics. You do not need to be a Communication Studies major to enroll and participate. All skill levels and experience is welcome! If you have any questions about joining the team, contact Director of Forensics, Lindsey Ayotte at ayottel@smccd.edu and (650)738-4276.

Article and Photos by Lindsey Ayotte