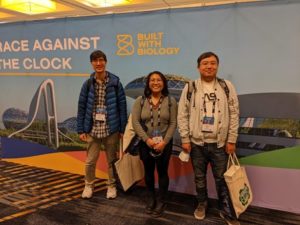 L-R: Johnathan Der, Leslie Igtanloc and Jonathan Zhang at Built with Biology Conference/Race Against the Clock Summit at the Marriott City Center in Oakland, Calif., April 14, 2022.

After a long delay with many starts and stops due to surges in the pandemic, Skyline College Biomanufacturing students met with biotech industry partners and other community college students from across the nation at the Built with Biology (formerly the SynBioBeta conference), an annual biotechnology conference started in 2015, and held on April 14, 2022 at the Marriott City Center in Oakland, California. This global conference focuses on biotechnology for food, biofuel and feedstock chemicals for a sustainable planet, not just biopharma.  Ivan Jaubert and Seth Peachey of Duplo Bio, hosts of Race Against the Clock (an annual summit part of Built With Biology), invited community college students and those who have a broad, general interest in biotechnology. The title Race Against the Clock is in reference to the sense of urgency necessary to fight climate change.

The conference was sponsored by Ginko Bioworks, which covered conference fees, lunch and a hotel room for both business and biotech students. Ginkgo Bioworks is a research and development foundation focused on utilizing genetic engineering for other biotech companies. To capture the attention of those unfamiliar with the field, they also publish magazines that showcase the different applications of biotechnology.

Students attended a wealth of show-and-tell and panel discussions at the conference. One particularly captivating talk was about Wonder Alpine, a company that makes skis from an algae-based bioplastic as a sustainable alternative to petroleum-based plastics (founded by Matt Sterbenz, a one-time philosophy major who switched to biotech). Similarly, bioplastics were also applied to such products as vinyl records, illustrating the vast applications of biotechnology and its potential to provide sustainable alternatives and solutions in addressing climate change. This was made more evident in the trade show where companies displayed and provided demonstrations of their products: cutting edge lab equipment, bricks made out of mushrooms, Virtual Reality software to examine 3D protein structures, cosmetics produced from genetically engineered bacteria, and, of course, the skis made from bioplastic. One company had a genetic foundry, a large gene library where they could create almost anything from scratch using synthetic biology. The representatives of these companies were very excited to talk to the students and one even offered a plasmid kit to students involved in research that could use them.

Biotech industry leaders also spoke about their career paths and industry experience, and shared advice for students and emerging leaders who aspire to be part of the industry. “As this is an annual event, it would be great to invite more students,” said Biotechnology professor Nick Kapp. “I hope that next year we can also invite our business students to come and see what opportunities there are in the nation’s growing bioeconomy,” he added.