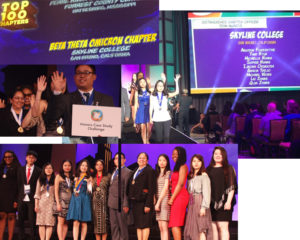 Skyline College’s Beta Theta Omicron Chapter of the Phi Theta Kappa Honor Society was named in the top 100 Chapters at the 2018 Phi Theta Kappa Convention in Orlando, Florida on April 6, 2019. Nearly 4,000 community college students participated in the three-day conference that was filled with scholarship and leadership forums.

Skyline College’s Chapter also received the 2019 Honors in Action Awards for their project. During the year, members investigated the relationship between tasting genes and food preference. The Chapter won the Honors Case Study Challenge for their entry on the benefits and risks of direct-to-consumer genetic testing. The Chapter has consistently earned national recognition since its chartering in 1999. The Chapter has earned Distinguished Chapter 13 times and has earned the Nevada/California Regional Distinguished Chapter award five times.

The awards were the result of competitive essays documenting the Chapter’s multiple projects this year, including a year-long project addressing microbiomes and service projects that taught computer literacy to local senior citizens and a project that brought science labs to middle schools.

Additionally, the 2018-2019 Chapter officers received the Distinguished Chapter Officer Team Award. Officers are shown in the photos receiving their awards on stage at the Convention Center.

“This recognizes our students’ outstanding service to our college and the community and recognizes Chapter members who work so hard during the academic year on the four PTK hallmarks of PTK: fellowship, leadership, scholarship and service,” said Christine Case, Phi Theta Kappa Advisor. “Phi Theta Kappa offers so many opportunities for our students to extend their education and experiences far beyond the classroom as they prepare for their futures.”

Phi Theta Kappa Honor Society is the largest honor society in American higher education with more than 1,300 chapters at two-year and community college campuses in all 50 of the United States and Canada, Germany, the Republic of Palau, the Republic of the Marshall Islands, the Federated States of Micronesia and the British Virgin Islands. There are 94 chapters in California.