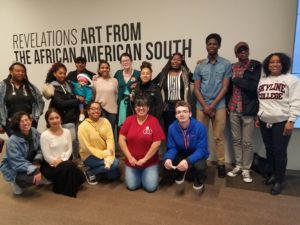 African-American Success Through Excellence and Persistence (ASTEP) students and participants of the Women’s Mentoring and Leadership Academy (WMLA) had the opportunity to attend the De Young Museum for its Revelations: Art from the African American South exhibit on Tuesday, March 20, 2018.

Revelations is an exhibition that depicts historical and current representations of African American culture, and consists of 62 works of art from 22 African American artists who have been relatively unknown to young people of our generation.  The exhibit included paintings, sculptures, drawings, and quilts that were acquired from the William S. Arnett Collection of the Souls Grown Deep Foundation.

Guided by docents at the De Young Museum, ASTEP and WMLA students were able to learn the historical significance and symbolic representations of each of the pieces. They also learned about each of the 22 African American artists featured in the collection.

The exhibit gave students the opportunity to learn more about issues in the U.S. regarding race, class, gender, and religion.

“Getting to see beautiful pieces of art, made by people who look like me, is so inspiring.” Olivia Yancey (ASTEP and WMLA Student) said. “It’s a reminder that we can take our pain and struggle and make it into something magnificent. It’s also a reminder that no matter who you are, you can succeed.”

Furthermore, students were given the chance to explore the rest of the museum that displayed art from the African Diaspora, Oceania and art from the Americas. The students also engaged in a live learning discussion of what they witnessed and experienced throughout the tour.

“I’m really happy I had the chance to see the exhibit based solely on African American artist’s transcending through multiple generations.” Zeppelin Dufour (student in Chris Collins’ African American History course) said. “It was not only fascinating but also inspiring. As an artist I’m fascinated by the creativity of other’s. Seeing the portrayal of the struggle of being back in white America was eye opening.”