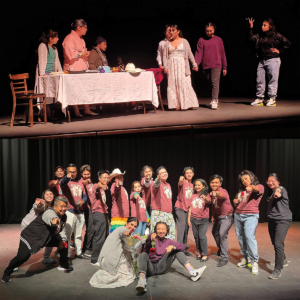 The Color of Love was a collaboration of the Kababayan, Puente, and CIPHER Learning Communities, another first in PCN history. The play was written in the ENGL 103 class in Fall 2021 by Emi Robles and Ezekiel John Recto; in Spring 2022, the ENGL 104/695 students directed and produced the play. Dr. Liza Erpelo teaches both courses.

The story followed two gay San Francisco State University seniors who announced their engagement to their conservative Filipino American and Mexican American families. The couple continued to fight for love and freedom as they faced opposition from their families and discovered their twisted secrets.

For two nights in a row, the audience positively received this PCN’s cross-cultural components that included but were not limited to Filipino American and Mexican American family dynamics, languages, dances, and music.

All proceeds from the ticket sales went directly to the Friends of Kababayan scholarship fund. More information about the Kababayan Learning Community and ways to donate to the scholarship fund can be found here: https://skylinecollege.edu/kababayan/index.php

Thank you and mabuhay!

← Self-Defense Workshop with Master Joseph Bautista – Tuesday, May 17
Save the Date: Commencement on May 27 →