Forensics Team Kicks Off Their Competitive Season at Virtual Camp 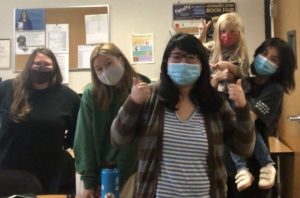 Specific topics covered in workshops ranged from how to build an affirmative case, platform speech composition, preparing for limited preparation events, constructing and refuting topicality, and how to “flow” a debate. The day culminated with students viewing virtual debate rounds as a way to prepare for future competition.

In an effort to ease into the transition back to campus, students were given the opportunity to come to campus and take advantage of available resources: a low distraction environment, private classrooms to zoom from, and reliable WIFI. The added bonus was much needed team bonding and community building. A special thank you to Professor Jessica Hurless for volunteering her time on a Saturday to come to campus and show support for the forensics team.

Cohost A Workshop With The Bay Area Entrepreneur Center 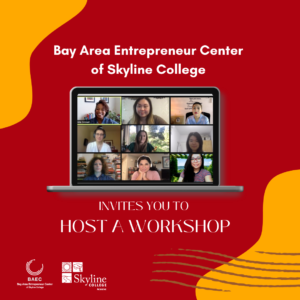 The Bay Area Entrepreneur Center of Skyline College (BAEC) hosts various workshops for the Skyline community, local businesses, and students. Due to the pandemic, the BAEC transitioned to hosting virtual workshops and events via Zoom, which allowed people from around the world to join us and learn more on different business topics like how to use Canva, tax law updates, or what it means to own an LLC.

If you have expertise that a small business or the community is looking for or you’re interested in hosting a workshop and share your knowledge, JOIN US! You can fill out a cohost interest form here and we’ll reach out to you.

For more information, connect with us at baec@smccd.edu. 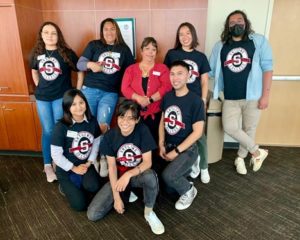 On Friday, September 17, the SMCCCD outreach offices hosted its’ annual districtwide campus ambassador training at College of San Mateo (CSM). College Recruiters, Jeremy Evangelista-Ramos (SKY), Estela Garcia (CSM) and Olivia Cortez-Figueroa (CAN) welcomed twenty new and returning campus ambassadors from all three colleges in-person to participate in engaging activities and learn about the functions of outreach and student recruitment. The training provided an opportunity to strengthen connections among the three outreach teams and focused on resocialization; after being remote for more than year.

The day kicked off with warm welcomes from Vice Presidents of Student Services, Dr. Newin Orante (SKY) and Dr. Manual Alejandro-Perez (CAN), who shared insight and thoughts about the value of campus ambassadors for our district and colleges; and the critical roles they play in ensuring we provide educational access for members of our community. Dr. Orante highlighted the importance of sharing one’s story to begin cultivating and building relationships with future students. “Providing them awareness of programs and services you’re utilizing as current students allows for meaningful dialogue and overall student success.”

The group was also joined and welcomed by SMCCCD Chancellor, Mike Claire, Acting President of Canada College, Kim Lopez, Acting Vice President of Student Services (CSM), Kristi Ridgeway and Director of Marketing (CSM) Dave McLain; all who shared hellos and stories about their backgrounds and experiences working for SMCCCD.

Jeremiah Sims, Director of Equity (CSM), facilitated the “Game of Life” with campus ambassadors, an activity that addresses the root causes of systemic inequity based on identities and experiences. “I wasn’t aware of the privileges I had based on being able bodied, versus those who are not – I thought privilege was only based on race and gender.” – Student participant.  The activity allowed campus ambassadors to critically think about various life scenarios that may influence opportunities, or lack thereof, for certain communities and student populations.

Sandy Allen, Director of (CRM) Salesforce, introduced the Constituent Relationship Management (CRM) tool to campus ambassadors. The campus ambassadors have been trained and are following-up with hundreds of perspectives students who haven’t applied to Skyline College after receiving automated messages after submitting a Request for Information (RFI) form. They help answer questions individuals may have about coming to the college through phone calls daily.

The College Recruiters ended the day with presenting unique academic and student service programs offered at the respective campuses; such as Skyline College’s Bachelor’s Degree Program in Respiratory Care and the Nursing Program at CSM. Overall, the campus ambassadors received a comprehensive training on various components to support student recruitment activities. Skyline College’s outreach office is excited to expand its’ team and continue in-person outreach efforts this academic year. 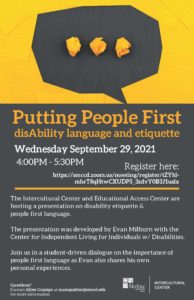 The Student Equity and Support Programs Division (SESP) invites you to our dialogue session on Putting People First: disAbility Language Etiquette facilitated by the Center for Independence of Individuals Living with Disabilities, happening on Wednesday September 29 @ 4PM.

What does accessibility mean to you? How are you being accessible to others?

Join us in a student-driven dialogue on the importance of “people-first language” as Evan Milburn shares his own personal experiences on the topic.

The Skyline View is Back in the Newsroom 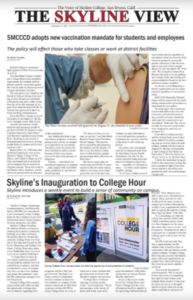 Did you know that The Skyline View is still producing “print” issues of the paper? You can find the most recent one on Issuu.com/theskylineview, which was produced by TSV staff in their newsroom on campus for the first time in 18 months, with new editor in chief, Steven Rissotto, at the helm. For some staff members, this was their first time on Skyline College’s campus, despite taking classes at the college for over a year.

Can’t wait for content in between production for the print version? Then, you can sign up for TSV’s weekly newsletter (scroll down on the website) and have timely Skyline College information sent right to your inbox.

Or come find us with updated contented throughout the week at theskylineview.com. We’re in your socials, too: Twitter, Facebook, Instagram, and yes, even TikTok—all under the handle @theskylineview. 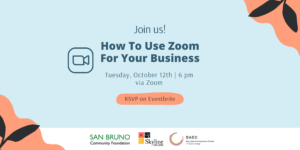 The Bay Area Entrepreneur Center of Skyline College, hosts and creates workshops, webinars, and tutorials all in support of small business development and of our local entrepreneurs.  Our coaches at BAEC, have scheduled wonderful and informative events for small businesses to gain knowledge in how to grow their businesses. If you’d like to register for our events, please contact us at baec@smccd.edu.  BAEC upcoming events include,

The BAEC is a small business resource and development center located in downtown San Bruno, serving all North San Mateo County.  To book a free coaching session or to learn more, complete this brief survey and connect with us at baec@smccd.edu.  Missed a workshop?  Check them out here on our YouTube channel.

After 17 months the BAEC Team members came back excitedly to re-open the doors on September 1st.  While the BAEC Team stayed busy during COVID with online coaching sessions, awarding San Bruno business with Micro Grants and providing support, it was very rewarding to walk into the office and reopen the center.  We hit the ground running, welcoming members and answering questions during our hours of operation. The BAEC is now open Monday-Thursday 10am -2pm, bring your ideas, questions or just pop in to say hello, we would love to see you.

The Bay Area Entrepreneur Center is a hub of resources for anyone looking to start and grow their business idea.  Skyline College students, faculty, and staff are welcome to book a business coaching session or attend a workshop! 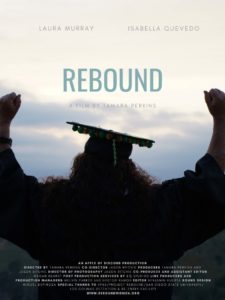 REBOUND tells the story of two women separated by decades and starkly different circumstances who rebound from incarceration. They each overcome their years of addiction and abuse to pursue the promise of higher education. These aspiring scholars navigate parole, raising young children, and self-healing to find acceptance, sisterhood, and hope for a new life.

In her new documentary airing on PBS, Director|Producer and Skyline College Film Professor Tamara Perkins, builds on the theme of life after incarceration she explored in her 2018 film “Life After Life” which follows the stories of three men as they return home from San Quentin State Prison. REBOUND takes us into the lives of 56-year-old Laura Murray and young single parent Isabella Quevedo as they follow new pathways following incarceration.

“All of my films are about connecting people and inviting folks to have a personal connection with those most impacted by systemic barriers to living healthy and prosperous lives,” says director Tamara Perkins. “In the US, the fastest growing rate of incarceration is among women. As Laura says in the film, ‘women have very different pathways to crime.’ They are more often associated with abuse, trauma, and survival. This is still not truly acknowledged or addressed.”

A watch party is planned for an encore broadcast of ‘Rebound’ on October 10 at noon. Perkins, and Laura and Isabella from the film will be live chatting and available to talk with viewers.

For more information about the live watch party event go to: www.reboundwomen.org

Tamara Perkins is an award-winning filmmaker and changemaker focused on documentaries that inspire transformative change through dialogue, healing and advocacy. Pulling from her work in restorative justice as a grief support facilitator, speaker and nonprofit director, she founded Apple of Discord Productions in 2006. Connecting media, activism and healing, she developed programs such as the Wisdom Project and San Quentin Media Project, which trained at-risk youth and incarcerated men in filmmaking as a tool for transformation.

Tamara’s film Life After Life (2018) began in her yoga class inside San Quentin State Prison when the men asked her to tell their story, and continues to be a catalyst for learning and advocacy nationally. As a crime survivor and justice impacted family member, this film is both especially meaningful and provides an often-overlooked proximity to storytelling. Her upcoming films, Clarissa’s Battle and Rebound, were each similarly inspired by a personal connection to the subject matter. Delving into screenwriting, her recent script melds present day social, moral, and ethical questions with a Woman-driven SciFi Thriller. As a national speaker, Tamara’s repertoire spans from filmmaking to prison issues and human rights. Notable partners include ACLU, Southern Poverty Law Center, Stanford Law and the Houston Institute for Race and Justice at Harvard Law. She is a recipient of the National Council on Crime and Delinquency’s Media for a Just Society Award. Tamara received her MFA from Vermont College of Fine Arts and is an adjunct faculty at St. Mary’s College of California and Skyline College.

“In the end, no one wins when our returning citizens do not succeed.” — Melba V. Pearson, Deputy Director, American Civil Liberties Union of Florida 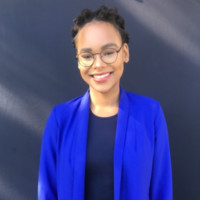 The Psychology Department is pleased to announce they are hosting a series of conversations with the intent of sharing information about different careers in the field of psychology.

The series kicked off on Wednesday, September 15th, with Skyline College graduate Ayanda Miti.  During the 60-minute conversation, Ayanda shared information specific to the career of Registered Behavior Therapist, including job duties, academic and training requirements, job outlook, and benefits and challenges related to the job.

Recordings of last semesters Careers in Psychology conversations can be found at https://www.skylinecollege.edu/psychology/careersinpsych.php.

For more information, or to request a link to the webinars, please contact Jennifer Merrill at merrill@smccd.edu, or Dr. Christina Shih at shihc@smccd.edu.