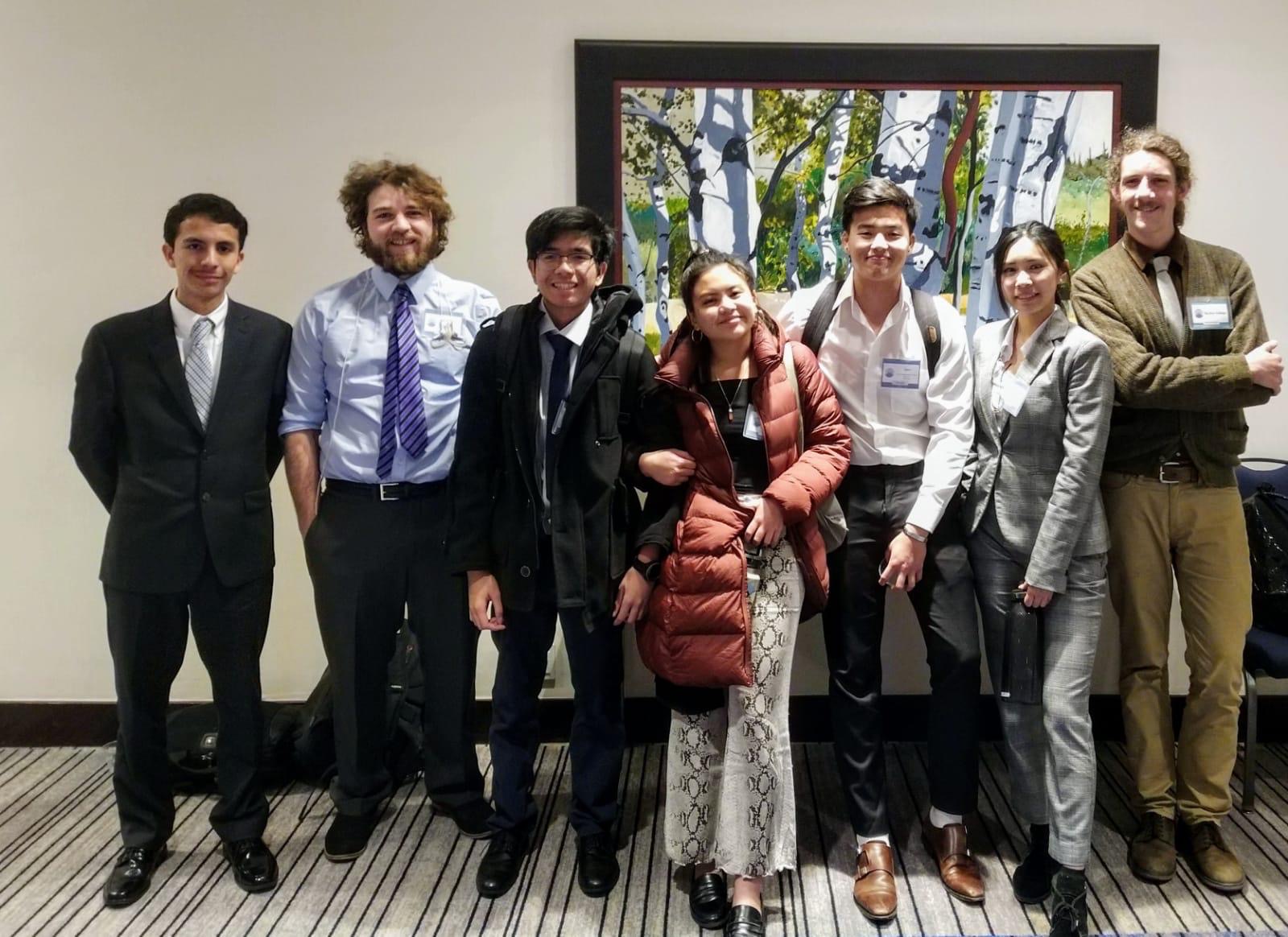 After many months of collaboration and hard work, the Model United Nations (MUN) team had the privilege of going to Vancouver to compete in the largest Model United Nations conference in Western Canada. The tournament was hosted by the University of British Columbia MUN delegation at the Hyatt Regency in Vancouver on January 17-19, 2020. The entire conference had the scope of taking up multiple conference rooms to hold parliamentary debate. Each committee was to hold simulations on how to solve global issues through the formatting of the United Nations. The conference held multiple simulation of committees, such as the Economics and Social Council: UN Commission on Population and Development, and the UN General Assembly Fourth Committee: Special Political and Decolonization Committee.

One of the key aspects that distinguishes the conference, is actually a press conference, where students are assigned a specific news outlet to represent, and are able to report and submit articles online. One of the students was a Skyline College student, Jacob Harding representing Israel Hayom, who actively reported and wrote articles on what was enacted at the conference. The articles can be found at: ubcmunipc.wordpress.com.

Ralph Alpay, a sophomore at Skyline College, as well as the Director of Marketing of MUN, was one of the students to attend the Canadian conference. He says: “The perspectives from different universities and international views was one of the most beneficial parts of experiencing an international conference”. As the Director of Marketing, Ralph also created a video on the club’s experiences which can be found here.

The college’s delegation was made up of six students who range in experience levels from beginner to intermediate and were able to exercise what they knew as well as gain new skills, polishing up their policy making skills, interpersonal relations, as well as their public speaking muscles.

This opportunity was one of the first times that SkyMUN as a delegation had the opportunity to go to an international conference. Through SkyMUN’s students, connecting and collaborating at UBCMUN 2020, the organization is building connections and relationships on an international level, connecting with the University of British Columbia’s delegation. This is with hopes of building and collaborating with other organizations on a global level as well. SkyMUN hopes to further build relationships with other organizations in the future.

Currently, SkyMUN is a proactive club that has goals to be involved on campus through collaborating with other organizations. SkyMUN actively welcomes new members who are interested in participating in debate both locally in weekly meetings at Skyline College, as well as those interested in travelling to participate in regional conferences and competitions. Please email skylinemun@gmail.com for more information. 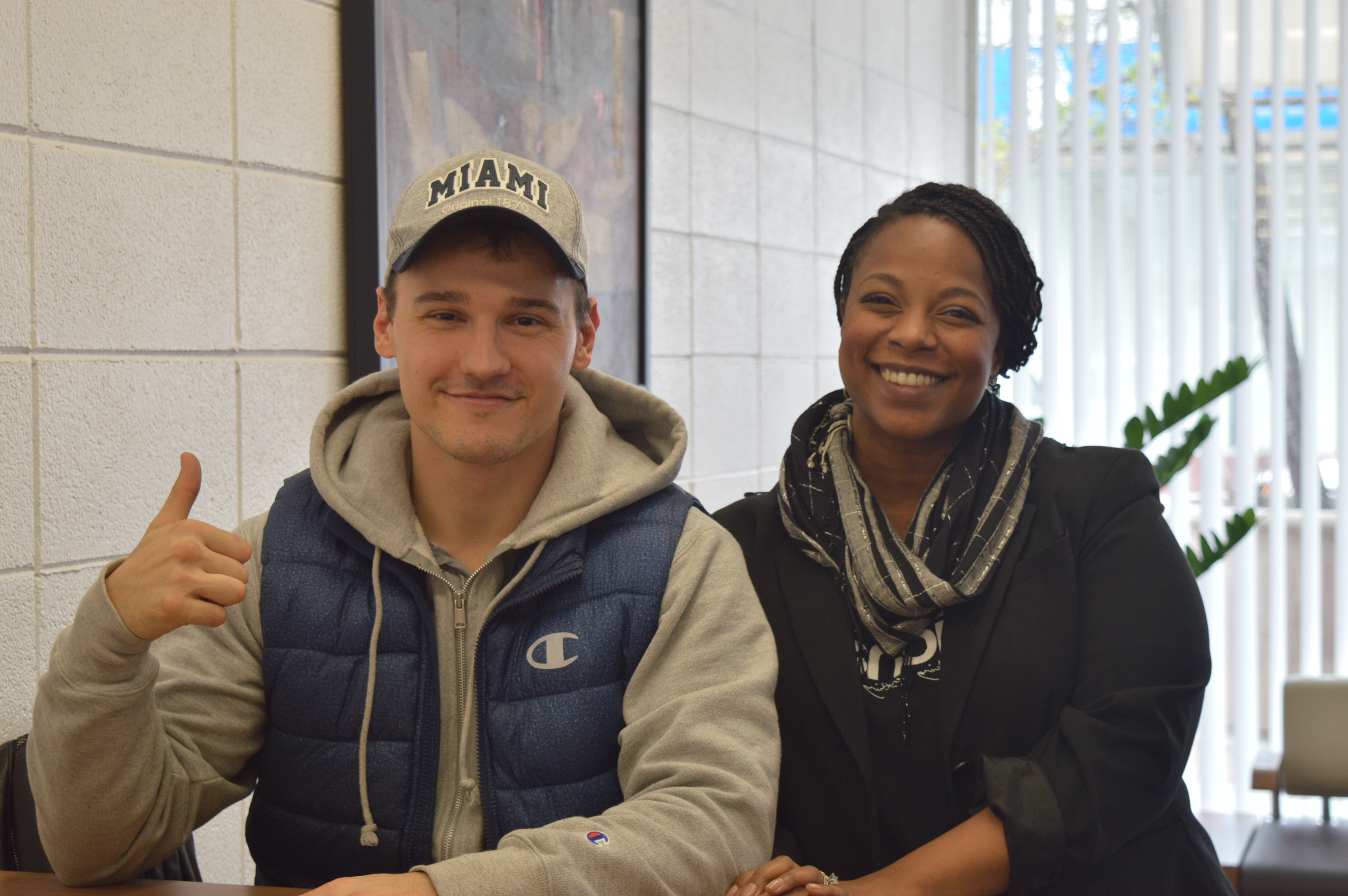 In a partnership between the Bay Area Entrepreneur Center and the Business, Entrepreneurship & Management Meta Major at Skyline College, business students are being referred to access services offered by the BAEC.

After and an in-class presentation by BAEC Director, Pcyeta Stroud and referrals from Business Professor, Soledad McCarthy, a number of students have stopped by the Center to sign up for coaching, co-working and other offerings. Radu Skutaru, an international student from Russia, and business major, was one of those students.

Radu had a very informative conversation with a BAEC coach regarding his business aspirations and next steps.  He learned that the Center offers one-on-one business coaching, social media marketing workshops, networking events and space for him to brainstorm ideas, bounce them off others or work independently, all at no cost to him. In response to learning about these resources the student said, “I can’t believe this is real!”.

Article and Photo by Sarina O’Gilvie

February Coaching Hours at the BAEC 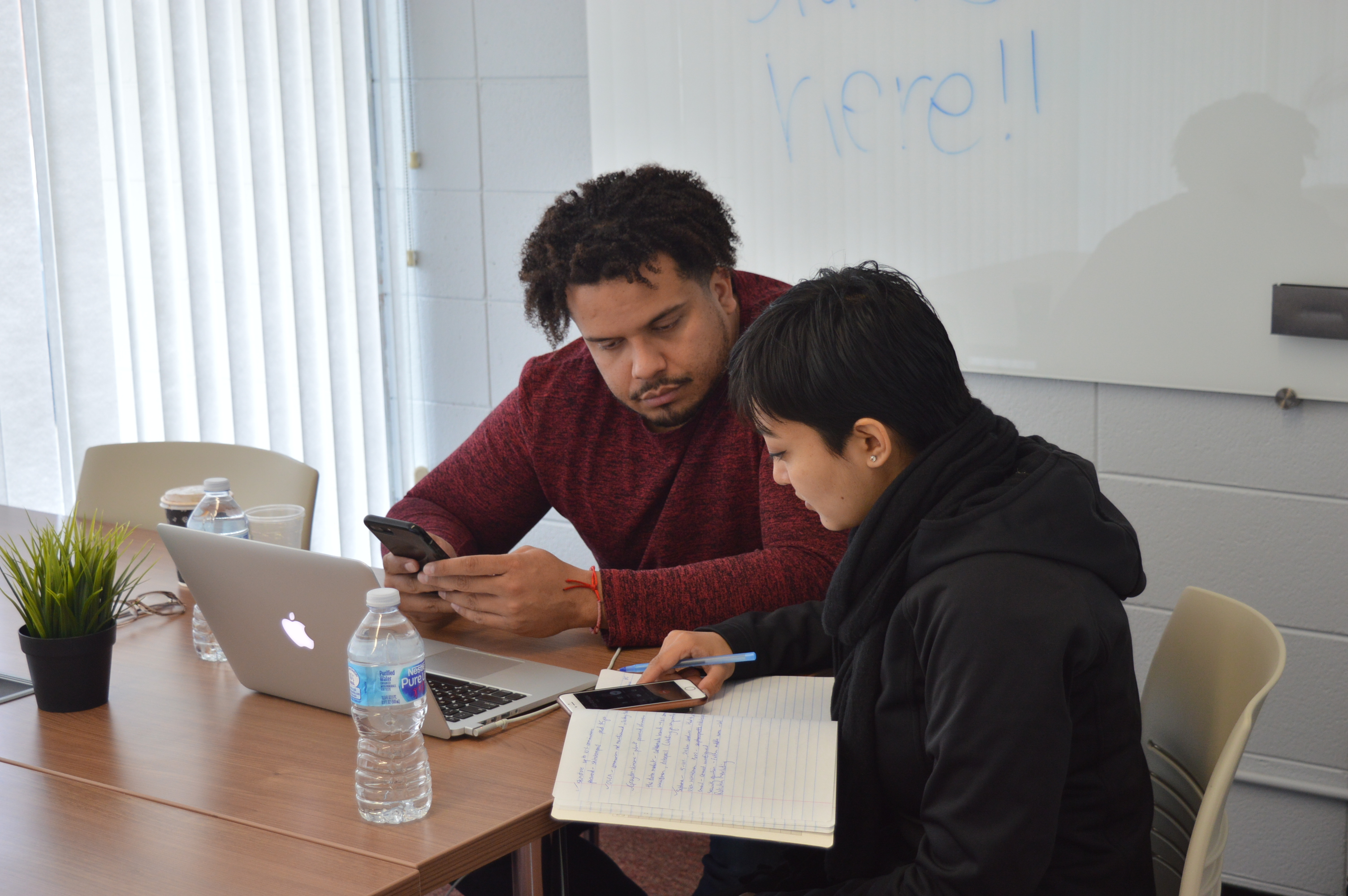 Come to the Bay Area Entrepreneur Center (BAEC) for our no-cost 1:1 coaching program that is sure to get you ready to conquer your goals in 2020!  Our team of coaches have expertise in areas ranging from marketing strategy to content creation, creative collateral assistance to prepping for that big interview.

Our Team of Coaches and Drop-in Hours for February 2020:

Come by and see us!

For more information on the BAEC please contact baec@smccd.edu 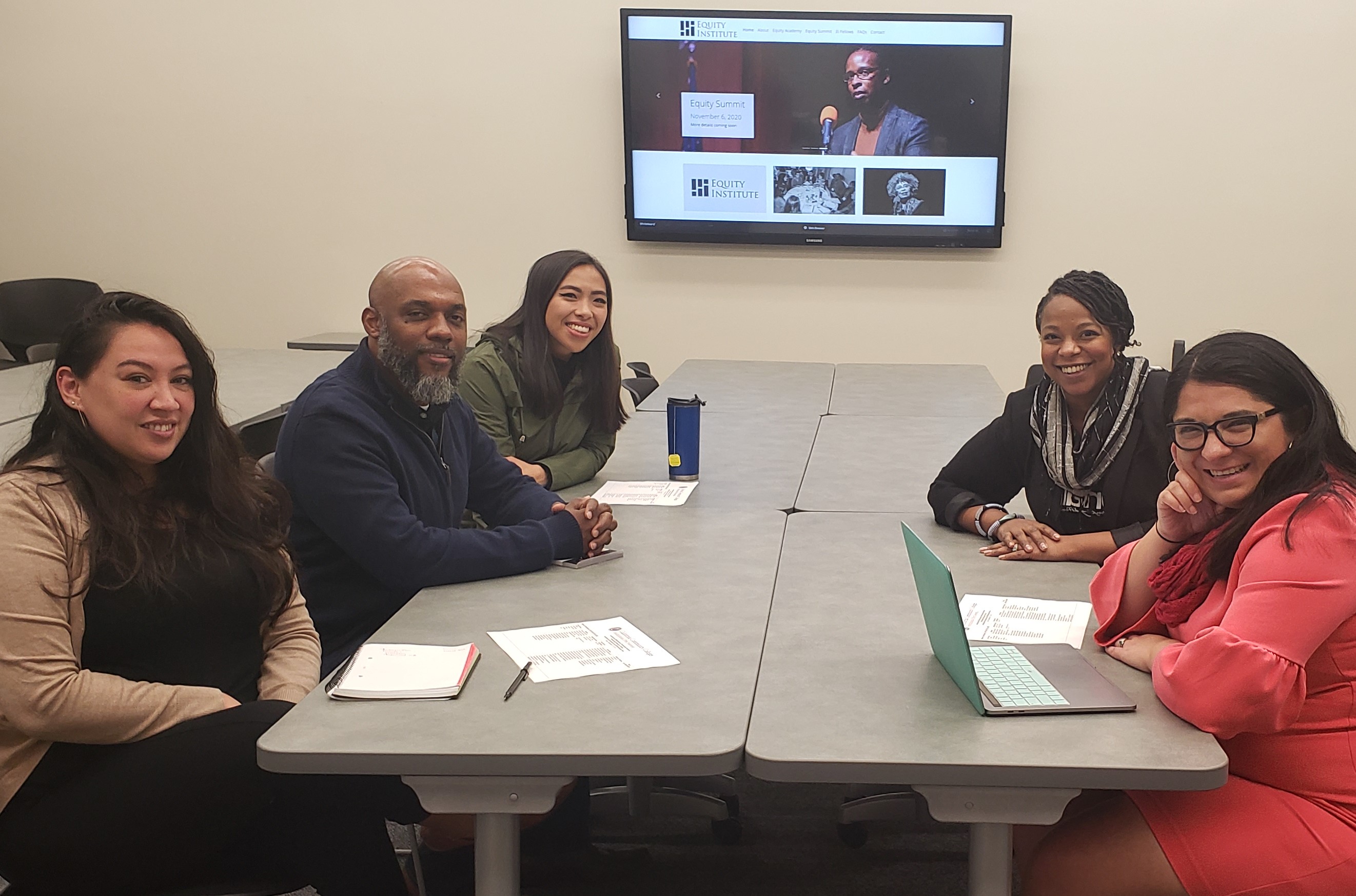 The Bay Area Entrepreneur Center has recently signed-on with the Equity Institute (EI) to provide business plan resources and financial forecasting services. The EI Team, led by Executive Director, Lasana Hotep, recently met with BAEC Program Coordinator, Nicole Moreno-Deinzer and BAEC Director, Pcyeta Stroud, to discuss the scope of the project and to provide valuable historic information on the EI and its importance to the college community. This meeting served as an opportunity to gain valuable insight into the EI and to further connect campus programs with BAEC services and offerings.  The group met in the Equity Institute’s brand new location on the second floor of Building 1.

The BAEC is an offsite location for Skyline College. It serves the college community by empowering students to develop and grow their ideas and by providing resources such as 1:1 business coaching, internship opportunities, fun co-working spaces, start-up assistance and special-topic workshops to local businesses and community members.

For more information on the BAEC, connect with us at baec@smccd.edu or visit us at skylinebaec.org.

To learn more about the Equity Institute, visit equityinstitute.com. 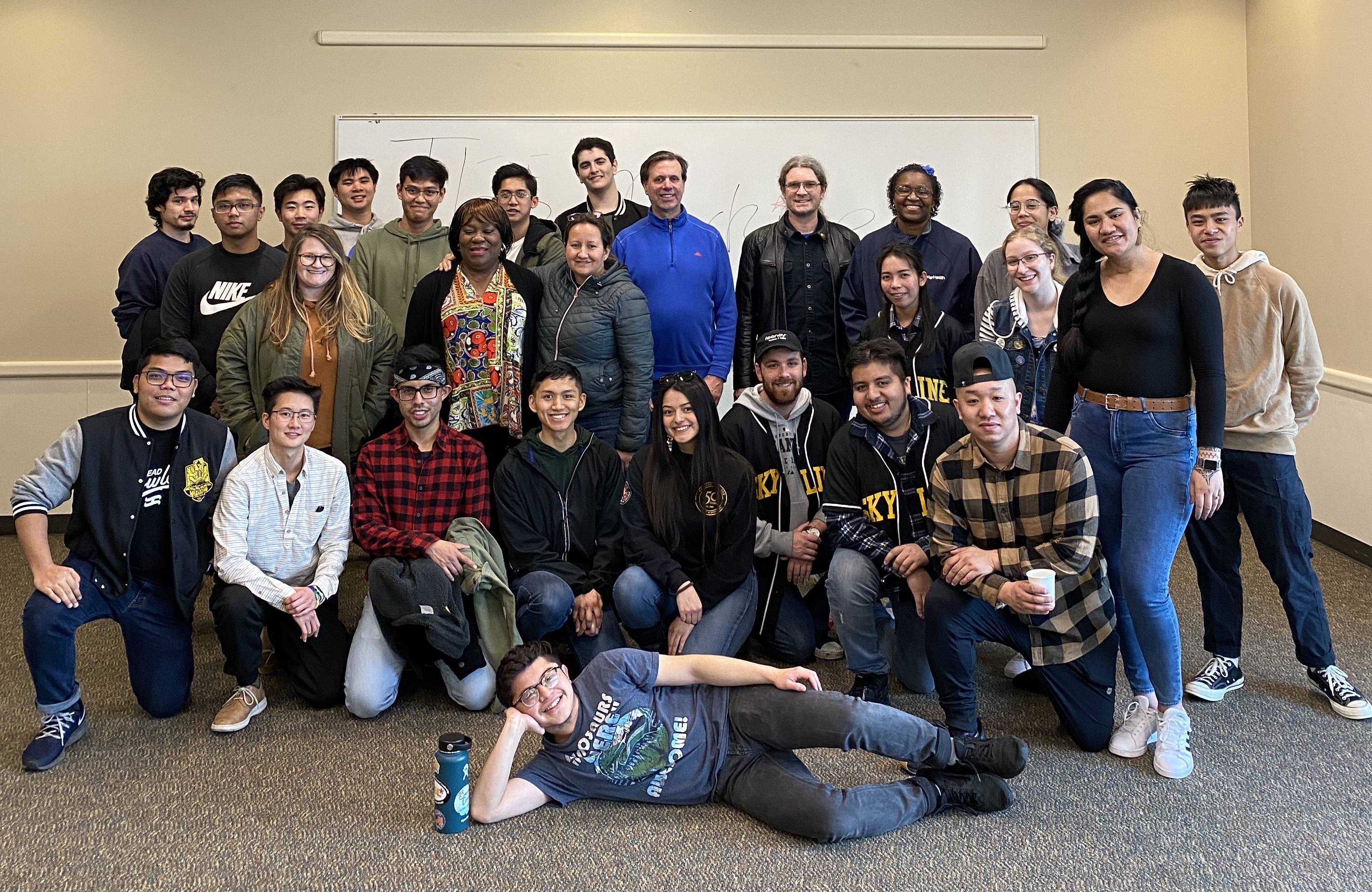 On January 24, 2020, The Associated Students of Skyline College (ASSC) hosted its inaugural Skyline College Organization and Club Council (SOCC) Leadership Training event. The goal of the event was to create a network opportunity that will bolster a sense of community within Skyline College and their affiliates. And by the looks of it, this event was a total success!

There were over 30 club members and advisors present for the workshops. The event started with a welcome from Alvin Gubatina, Student Life and Leadership Manager. After it was Ryan Samn, Student Life and Leadership Assistant, and Marcy Escobar, ASSC/SOCC bookkeeper, leading a presentation on the proper ways to handle the paperwork process. They went over topics such as reimbursements, booking locations around campus for events and emphasized the importance of sustaining equity within Skyline College.

Furthermore, workshops were on the anatomy of a flyer and pocket to project led by the Photography Club (Minn, Marie, Zin, Ricky, Ricardo, Mauricio, and Zaw) and Strategic Partnerships & Workforce Development (Milli and Tia) respectively. They were chosen because they attended this past Adobe Max Conference back in November. Photography Club introduced this easy and free to use website, called Adobe Spark, which makes the arduous flyer making the process fun and simple. After teaching a quick How-to session, Photography club tasked different groups to create flyers for this upcoming Club Fair event. Additionally, Strategic Partnerships & Workforce Development held a workshop on Adobe Capture, an app used for scanning shapes, finding text fonts and exploring the world around us through this amazing tool that is useful for creating logos, patterns, and even more flyers. Their goal was to teach easy and applicable skills to advertise and market their clubs and upcoming events to increase student engagement.

Lastly, the Associated Students of Skyline College lead an activity that demonstrated the importance of every person’s contribution to being leaders of these clubs. Alvin concluded by sharing his awe-inspiring ambition to create an undeniable sense of community at Skyline College. His message was so clearly received that club members got straight to work by spending the remaining time of the event talking, bonding and collaborating, successfully achieving the whole purpose of this event.

How may we assist you in landing your dream job? The Career Readiness & Job Placement team is excited to share the following job opportunities with you. Check them out –

Business and Profession Coaching at the BAEC 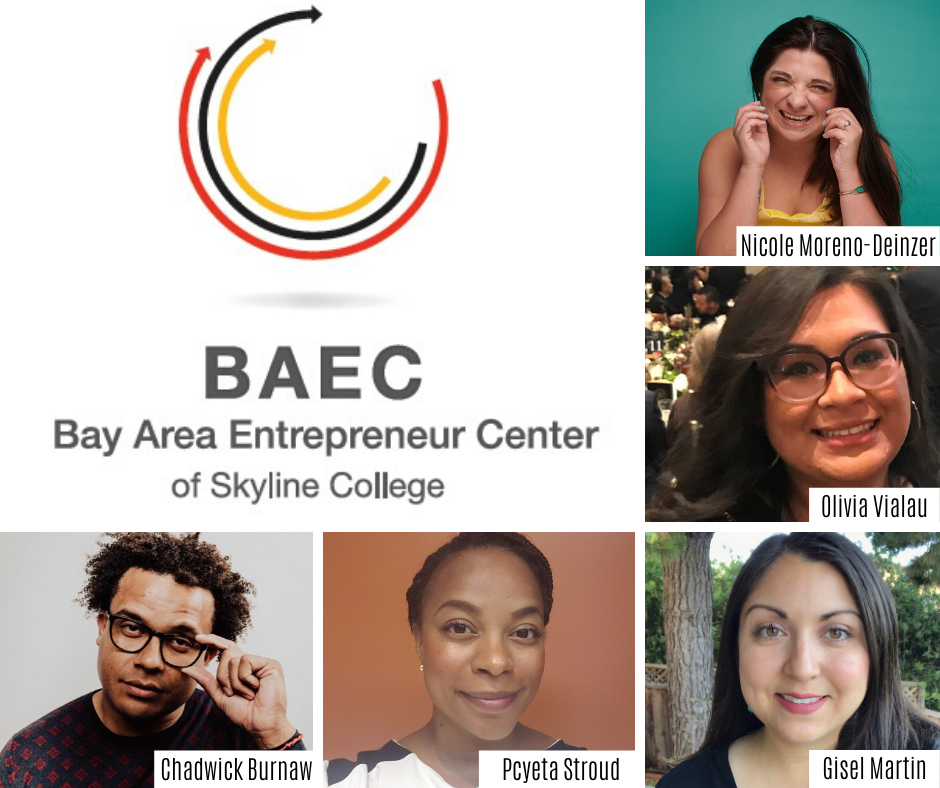 Come to the Bay Area Entrepreneur Center (BAEC) for our free 1:1 coaching program that is sure to get you ready to conquer your goals in 2020! Our team of coaches have expertise in areas ranging from marketing strategy to content creation and from creative collateral assistance to prepping for that big interview. Our coaches are here in-office most days of the week, you’re welcome to make an appointment or simply stop by during their drop-in hours.

Our Team of Coaches and Drop-in Hours:

Come and see us!

For more information on the BAEC please contact baec@smccd.edu.