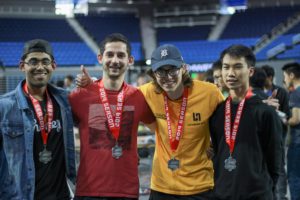 Over spring break, a group of Skyline College attended and won a hackathon event at UCLA. Hackathons are programming competitions where college students and young professionals work on small teams to build a functioning hardware or software project in a limited period of time. LA Hacks is Southern California’s oldest premiere hackathon, with over 160 teams and over 700 participants at this year’s event.

The project itself was an app (called Harvyst) integrated with a physical hardware system to care for and monitor plants. The system could collect data from temperature and soil moisture sensors, as well as water and cool plants using a fan and a motor that could move a water pump along a track. The hardware was programmed using Arduino, then connected to the mobile app by using a Raspberry Pi and React Native.

This was the first time three of the students had participated in a hackathon event, and after their success they are all excited to participate again. More details about the project can be found at devpost.com/software/harvyst.