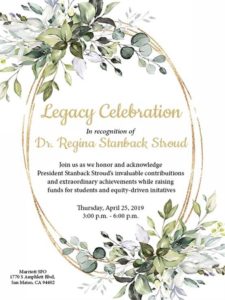 As we celebrate Dr. Stanback Stroud’s retirement, we’ll also be raising funds for the Promise Scholars Program and the Equity Institute!

Please register online to attend this event. We hope to see you there!

The Learning Commons is now providing Proctoring Services! Proctoring services are available by appointment for individual make-up exams at the following times:

Proctoring requests must be made by the instructor. To request test proctoring services for individual make-up exams, faculty can submit a Test Proctoring Request Form.

For the first time in its 12 year history, RTSB held separate conferences for youth and educator’s. On March 9, 2019, over 100 educators gathered to discuss Hip-Hop education and best practices for utilizing hip-hop pedagogy in their educational spaces. Educator’s participated in workshops such as:

Educators also participated in a recess session to tend to their physical and mental health as well as nurture connections with others. Recess sessions included yoga, dance, kickboxing, therapy coloring and a Heart to Heart conversation. Over $3,000 was raised through the educator’s conference to help support scholarships for RTSB and the CIPHER learning community. On March 23rd, RTSB hosted over 300 youth from K-12, colleges/universities, and non-profit organizations. Participants attended workshops in:

Rock the School Bells 12: Heart and Soul was also highlighted by amazing keynote speakers: Allyson Tintiangco (Heart) and Colin Ehara (Soul) who motivated our educators and Uce Veu (Heart) and Anthony (Ynot) Denaro (Soul) who captivated our youth. Through their words they inspired us to continue creating spaces for artistic expression, take risks and build around love and community. The youth conference was capped off with a special MC Battle and All-Style Dance Battle that showcased their creative talents.

Thank you to our Skyline College Community and Leadership for their continued support throughout the years and especially through these exciting changes for Rock the School Bells! A heartfelt Thank You and Congratulations to the Leadership team who dedicated countless volunteer hours to put together RTSB 12: Heart and Soul.

Since 2007, RTSB has been a space for youth and educators to build community around hip-hop education and under new leadership that vision continues. If you would like to learn more about the RTSB Leadership team or how to get involved in future events, please visit: rocktheschoolbells.com. 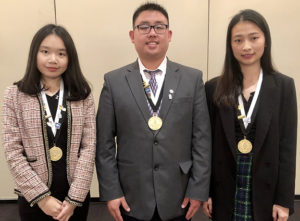 Two Skyline College students, Michelle Huang and Yuele (Nora) Zhang, were selected for the All-California Academic Team first team. These students were honored at the California Community College League Award Luncheon in March. In addition to the All-California Team, Michelle was also selected for the Coca-Cola Gold Academic Team. Dean Ray Hernandez accompanied Nora and Michelle to the Community College League Luncheon to receive their awards.

Michelle Huang is a Business Administration major at Skyline College. She is President of the Beta Theta Omicron Chapter of Phi Theta Kappa and is in the Honors Transfers Program. Michelle previously served as Student Organization and Club Council Liaison for the Associated Students and as Secretary for the Skyline College Chapter of Kappa Beta Delta Business Honor Society. Michelle has a passion for learning and for serving. She presented her research on tax amnesty at the Bay Area Honors Research Symposium. She is a Peer Tutor for Economics, Accounting, and Statistics and a Peer Mentor. Through Phi Theta Kappa, Michelle volunteers at senior centers and middle schools and did a fog-use study for the College. Michelle aspires to work in finance then give back to the community by becoming a college professor. Michelle wants to inspire individuals to aim high, believe in their capabilities, and act toward their dreams.

Yuele (Nora) Zhang is a Biochemistry major at Skyline College. She is in the Honors Transfer Program and serves as Vice President of Records for the Skyline College chapter of Phi Theta Kappa. Nora has a passion for learning and promoting education for everyone. During Spring 2018, she organized science labs to encourage young women to pursue STEM. She currently works in the College Learning Center as a chemistry tutor and volunteers for coastal cleanups, which help strengthen people’s awareness about the environment. Nora volunteers at a senior center to help elders with technology. Nora plans to transfer to UC Berkeley. Her long-term goal is to be a pharmaceutical researcher and contribute to medicine development.

Students gathered at the Fireside Dining Room and were introduced to traditional Cambodian clothes, food, language and a game. The crowd was invited to learn how Cambodians wore traditional scarves and encouraged to take photos after dressing up in the scarves. They were also treated to a taste of Cambodia in the form of charbroiled beef with peanut sauce,cucumber salad and black sticky rice with fresh mango. These delicacies were definitely a crowd favorite!

The event also showcased a traditional Cambodian boardgame, Klah Klok. People were invited to guess which images would appear on dice and win delicious South East Asian candy in return.

The event was well-attended, and everyone went away with a little bit of Cambodian culture with them in the form of their names in Khmer, photos, candy or food in their belly!

ISP’s next event, Global Extravaganza, will be held on April 30, 2019 in the Quad. Look out for Taiko drummers and the opportunity to learn more about the various international cultures that are represented here at Skyline College!

Officers were elected by a voting delegate from each chapter in the Region. Faculty advisors from the Region said that Thanh’s and Sophie’s speeches were excellent. The President presides over the Regional Leadership Conference and the Regional Convention and directs regional activities and projects. The NW District Vice President must hold two District Summits for the colleges in NW California. Additionally, Skyline College students Michelle Huang, Michael Wong, and Yuele Zhang were elected to the Regional Alumni Association Board.

As we celebrate Dr. Stanback Stroud’s retirement, we’ll also be raising funds for the Promise Scholars Program and the Equity Institute!

Please register online to attend this event. We hope to see you there! 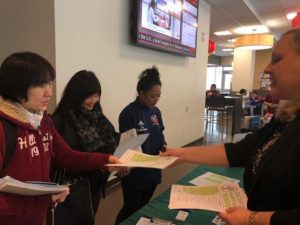 On Tuesday, March 12, 2019, Skyline College’s Education and Child Development Program hosted its Spring 2019 “Career’s With Children” event. This event was being offered once a year in the evenings during the Fall semester and had such a great turn out that we decided to do it once a semester instead.

This event came about due to the increasing shortage of qualified staff to work with children in the Bay Area. If you missed this event and would like information on becoming a teacher or working with children, youth or families, contact EDU/CD Program Services Coordinator Kristina Browner at brower@smccd.edu or stop by the EPICenter in Building 8, Room 8-317 and her office next door.

Nearly 1,200 Girls Expand Their Horizons in Science and Math at Skyline College 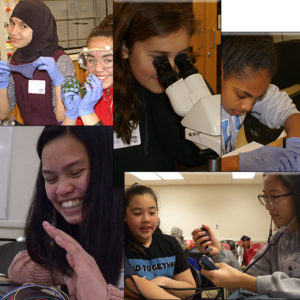 The program is available at skylinecollege.edu/eyh. Another 70 Skyline College students volunteered to be go’fers at the conference to help usher girls between their sessions.

Vice President Jennifer Taylor-Mendoza started the day by welcoming the girls and introducing keynote speaker Zoe Zappitell, who gave an inspiring talk, encouraging the girls that they can do anything they want. Ms, Zappitell is a tech entrepreneur, formerly with Zynga.

In their workshops, girls designed a secret code, collected forensic evidence at the “murder in the produce aisle,” made lip balm as “cosmetic chemists,” “scrubbed in for surgery,” and learned the chemistry of magic tricks. There were 36 concurrent workshops for girls. Each girl participated in three workshops during the day.

Expanding Your Horizons aims to encourage girls to participate in high school math and science courses, provide role models for young women who are interested in math and science and provide support for and promote interaction between people employed by industry and education. 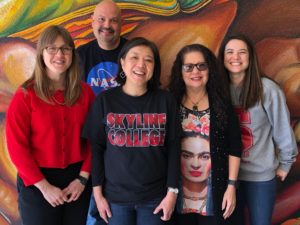 On March 25. 2019, the English Language Institute will be renamed ESL Connect to effectively illustrate the community and support the program provides for ESOL students.

Twice each academic year, staff and faculty hold ESL registration day to help new students go through application, placement, orientation and registration in one day. Staff connects ESL students to a wide-variety of campus resources, including the Learning Center, DREAM Center, SparkPoint, Financial Aid and counseling to ensure that college remains financially accessible to all.

In coordination with the Learning Center, ESL Connect staff connects students to academic support with ESOL tutoring as well as grammar and conversation workshops. The staff and faculty of ESL Connect exemplify what it means for a college to be student-ready. Please join us in celebrating the transition from the English Language Institute to ESL Connect on March 25, 2019 and March 26, 2019 from 11:00 a.m.- 3:00 p.m.