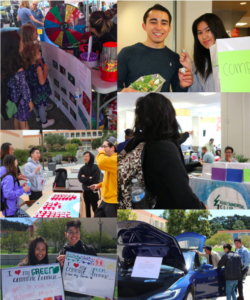 The Skyline College campus community celebrated Earth Week with a number of events organized by the Environmental Club and Science/Math/Technology Division.

By assigning each day a specific environmental topic and corresponding activity, members of the Environmental Club sought to raise campus awareness of important sustainability issues.

Highlights from the week include an electric vehicle showcase on the Quad for “Transportation Tuesday”, a waste sorting game on “Throwaway Thursday” that educated students about recycling and composting, and a blind taste test of bottled and tap water for “Water Wednesday.”

The Environmental Club’s President, Kelly Wong, says Earth Week went even better than expected. “It was a small gesture in the grander scheme of things, but for the Environmental Club it was a great way for us to plant a seed and generate conversations on and off campus about environmental issues.” Kelly hopes those who participated in the activities share what they learned with others.

Global Trade and Logistics Program Visit the Port of Oakland 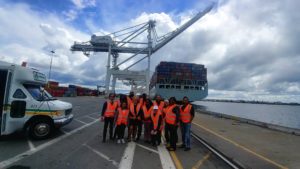 The Center for International Trade Development (CITD) Director, Lorna Jones, and Skyline College Global Learning Programs and Services (GLPS) faculty, Alpha Lewis, and students in his Global Trade and Logistics course, visited the Port of Oakland on April 16, 2018. The group met with representatives of SSA Terminal and were given a full tour of the port by Susan Ransom the Client Relations Manager.

This direct exposure to operations at the Port of Oakland reinforced classroom learning and gave the students a thorough understanding of the processes involved in moving goods into and out of the Bay Area through the Port of Oakland. The students also had an opportunity to see stevedoring (waterfront manual laborer who are involved in loading and unloading ships, trucks, trains, etc.) in action, as well as various machinery and equipment, including refrigeration units, containers, and ships. The students asked many questions and were excited to learn about the numerous operations and roles involved in managing the port.

This trip reinforced the Skyline College goal of connecting students directly with industry and supporting students with twenty-first century workforce skills needed to secure employment in the Global Trade and Logistics industry. 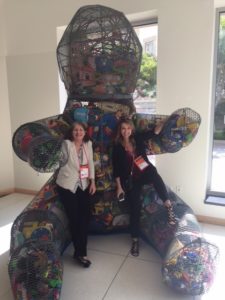 Program Coordinator, Kate Williams Browne, Child Development Coordinator, Tina Watts, and Program Services Coordinator, Kristina Brower presented at the State Conference for the Education of Young Children’s Leadership day on April 19th. The presentation was based off the summer math enrichment program that was implemented last summer 2017 at the Child Development Center with Early Childhood Students leading a math curriculum for the preschool children.

Participants were given information about early math concepts and then lead through an activity that could be implemented in their early childhood programs. Participants were then able to document the math learning that took place and create an action plan. This workshop, “Easy as 1, 2, 3…” was well attended by early childhood educators that are looking for ways to introduce math concepts to young children. 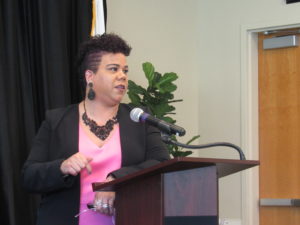 Skyline College hosted the Call to Consciousness College Lecture Series on April 12. This program was co-sponsored by the Center for Student Life and Leadership Development, the Associated Students of Skyline College (ASSC), and the Division of Student Equity and Support Programs (SESP).

The program opened with welcoming remarks from Dean Lasana Hotep and Vice President of Student Services, Dr. Angélica Garcia. This was followed by a performance from Detroit-based poet and entrepreneur, Jessica Care Moore. ASSC President, Leandro Torres Mantilla then introduced the guest speaker to the podium.

Rosa Clemente talked about the irony of growing up in the South Bronx and Westchester in New York, her college experience at the State University of New York (SUNY), graduate school, and becoming a politically and socially conscious organizer. In sharing her story, Rosa also addressed a number of topics including: the politics of race and ethnicity in Black and Latinx communities, U.S Immigration Policy, Hip Hop Activism, and the importance of learning about the hidden histories of social justice movements in the United States.

“I loved her humility, honesty, dedication and the passion she has for her movement.” Skyline Student Leandro stated.

During the second half of the lecture, Rosa talked about the challenges she faced and lessons learned from running as the Vice Presidential Candidate for the Green Party in the 2008 Election, the Black Lives Matter Movement, and the violence that broke out in Ferguson after the murder of Michael Brown. Rosa Clemente received a standing ovation from the audience engaged them dialogue during the Question and Answer Segment.

“As someone who identifies as Latina, the conversation focused on the divisions within our own communities, in relation to skin color, are very relevant.”Faculty member, Rocio Aguilar-Pedroza stated. “Often times we are pushed to silence discrimination within our own communities, but to truly stand with others as accomplices, not allies, as Rosa stressed we need to be open to having these difficult conversations and challenging each other.” 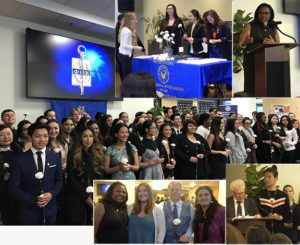 With over 200 friends and family in attendance, 141 students from Skyline College, 86 from CSM, and 98 from Cañada College were inducted into the Phi Theta Kappa Honor Society for the 2017-18 academic year. Members must have a minimum GPA of 3.5 and 12 degree-applicable units. On April 13, Beta Theta Omicron, the Skyline College chapter, hosted the induction ceremony for new members of Phi Theta Kappa from the three SMCCCD colleges. It is a tradition to alternate the induction ceremonies between the three chapters. Skyline College President Regina Stanback Stroud gave the keynote address and commended members on their academic achievement.

Dr. Stanback Stroud encouraged each chapter to tackle important societal issues for their 2018 Honors in Action project on Transformation: Acknowledging, Assessing, and Achieving Change. Professor Paul Spakowsky read the names of new members as each came forward to receive the symbolic candle and flower. Beta Theta Omicron awarded honorary membership to Dr. Stanback Stroud, Stephen Fredricks, Kylin Johnson, and Nadia Tariq for their continued support of Chapter activities. Some of the new Skyline College Phi Theta Kappa members are shown in the photo. 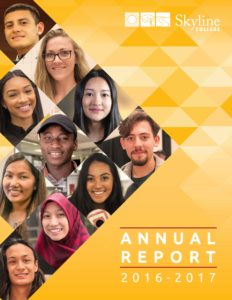 Skyline College has won four statewide marketing awards, including one first place award, at the Community College Public Relations Organization (CCPRO) Conference. The conference is the annual meeting for marketers and communicators at California’s 114 community colleges and is an opportunity to learn new skills and network with colleagues across the state.

“These awards demonstrate the talent and hard work of our marketing team,” said Cherie Colin, Director of Community Relations & Marketing. “We are immensely proud of this recognition and will continue to create stellar work that clearly, concisely and effectively communicates with our campus and the community.”

The annual report blended graphic design and engaging content seamlessly to tell the story of a year in the life of Skyline College. It has been used as a marketing piece for the outside community and represents a public-facing record of the college’s most impactful and inspiring accomplishments.

Each of the winning marketing pieces connected with the intended audience using vibrant, simple visuals, and clear, engaging text. 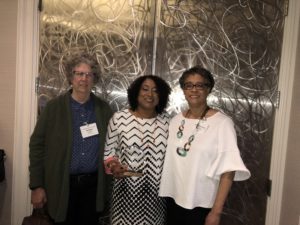 Powell has demonstrated excellence in supporting students who are historically underserved in her teaching and programming. She consistently makes the classroom and the college a place of connection, understanding, and support.

The Stanback Stroud Diversity Award is an Academic Senate award and is sponsored by the Foundation for California Community Colleges. It honors faculty who have made special contributions addressing issues involving diversity and perform in an exceptional manner to advance intercultural harmony, equity, and campus diversity by making exceptional contributions to the college beyond their usual obligations.

“She saw students that indicated a certain need, and she wanted to reconceptualize how the students would be served.” Skyline College President Dr. Regina Stanback Stroud said.

Powell is the founding director of the Women’s Mentoring and Leadership Academy at Skyline College. WMLA is a mentoring program for women who feel as though they are on the margins of academic life and brings them to the heart of an academic experience, drawing them into relationships with key advocates on campus, and connecting them to support offices that can provide them with tools and resources to increase their security and well-being and reinforce the idea that they are deserving of help, respect, and success.

Powell also coordinates the African- American Success Through Excellence and Persistence Learning Community, where she has raised rates of success in communication courses, and leads study abroad facilitating experiences for students that are transforming and life changing.

The 19th Annual Juried Student Art Exhibition will open next week at the Skyline College Art Gallery. The exhibition will be on view from April 23 – May 11, and features sculpture, paintings, drawings, photographs, ceramics, mixed media and digital media artworks by Skyline College students.

We will have a reception for the artists on April 26, from 12 p.m. – 2 p.m. Come join the fun and support the arts at Skyline College! Refreshments will be served. Be sure to come check out this fantastic exhibit.

The Skyline College Art Gallery will be open daily, and is located on the ground floor of Building One. For more information, including hours, please visit the gallery website or Facebook page.

The Annual Student Art Exhibition is a vital part of the Skyline College Creative Arts program, and is an essential component of an art student’s educational experience. It provides students the opportunity to prepare and present their artwork in a high quality setting, and serves as a platform for public exposure – itself a learning experience different from that gained in the classroom – and facilitates community-building by bringing together students, their families, faculty and staff, and the local community.

On April 26th, the reception and awards ceremony for the 19th Annual Juried Student Art Exhibition will be held against a lively backdrop of music, oven-fresh pizza, desserts, and beverages. Featuring over 140 artworks in all media, the Skyline College Art Gallery is a great place for students, their families, and faculty members to mingle and learn more about each other.

The Skyline College Art Department and art gallery extends their congratulations to all of the students who participated in this year’s exhibition!

This year’s Juror’s Awards go to:

Skyline College’s Art Gallery is an educational and community oriented exhibition space, with programming that reflects our College Mission and Values. We exhibit a mixture of student shows, faculty exhibits, and curated exhibitions featuring local, national and international artist. 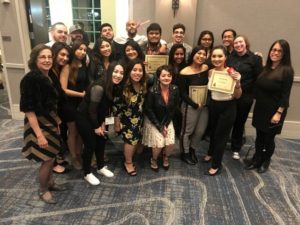 For the second year in a row, The Skyline View has taken first place for online general excellence in the two-year college division of the 2017 California Journalism Awards hosted by the California News Publishers Association. Judges said the site was full of “great visuals” and “well-written content on many topics.”

This came on the heels of several awards won at the 2018 Journalism Association of Community Colleges State Convention held March 22-25 in Burbank, CA. Skyline College brought its largest contingent ever to the convention: 20 students spanning all sectors of the journalism program. The publication was honored with online general excellence for theskylineview.com and its magazine, Viewpoint—which has only published three issues so far–also received a general excellence.

Finally, the convention topped off with editor in chief Lauren Gozon and editor at large Laurel Lujan both bringing home JACC scholarships. (Lujan also is the first recipient of the Carolyn Livengood Journalism Scholarship, as well as having recently been chosen to participate as part of a pilot reporting team called the California Community College Journalism Collaboration Project.) 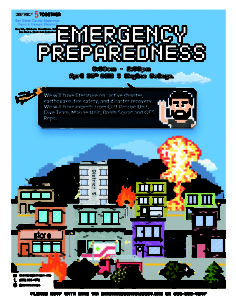