The National Wrestling Hall of Fame announced on Thursday that the Class of 2018 inductees will feature Distinguished Member Lee Allen who will be inducted posthumously as he passed away in 2012 at the age of 77.

His San Francisco Peninsula Grapplers women’s team won the senior national championships in 1997 and 1999. Allen was head coach of the women’s wrestling team at Menlo College in California from 2001 to 2010 where he coached both of his daughters, Sara Fulp-Allen Bahoura and Katherine Fulp-Allen Shai.

Sara was the first three-time women’s college national champion, and an injury prevented her from competing as a senior to try and become the first four-time champion.

Allen was a four-time undefeated Oregon state champion for Sandy High School in Sandy, Oregon, and competed in college at Portland State from 1952-54. Allen was the head coach of the 1980 Olympic Greco-Roman team, which did not compete in the Olympics in Moscow, Soviet Union, because of the U.S. government boycott of the Games. He was an assistant coach for the United States Greco-Roman team at the Olympics in 1972 and 1976. He was head coach of four United States Greco-Roman teams at the World Championships in 1973, 1977, 1978 and 1979. The 1979 team finished fourth with three individual medalists, which was one of the best Greco-Roman performances of the time period.

Earlier this year, Skyline College was awarded a grant to replicate the NOVA Job Center model, which has been successfully implemented in Sunnyvale and San Mateo. This new program will be offered as a part of SparkPoint and Career Services, complementing our current service offering by providing additional career counseling, workshops, resume assistance, interview preparation, job search support, and other resources for individuals seeking immediate employment. NOVA will be fully integrated into the SparkPoint program, thus all services are free of charge and open to both students and community members.

We are excited to announce that NOVA will be launching services on Monday, November 6, 2017 at the SparkPoint and Career Services Center (building 1, floor 2). Program registration, appointment booking and workshop schedules will be made available on launch day. Additional information about registration time will be provided next week.

If you have any questions with regards to the NOVA Job Center or you would like to refer a student or community member to participate, please contact the NOVA Program Services Coordinator, Kathleen Velasquez, at velasquezk@smccd.edu. 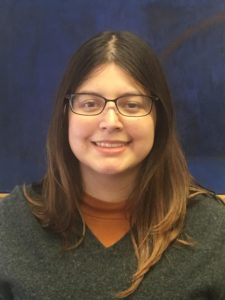 SparkPoint and Career Services at Skyline College would like to extend an official campus-wide introduction to a new member of the team, Kathleen Velasquez.  Kathleen holds a B.A. in Economics from the University of California, Santa Cruz. She started her career in private wealth management, but switched to social finance and the nonprofit space; Kathleen wanted to apply her skills and knowledge to make the world a better place, rather than simply focusing on portfolio growth and seeking profit. To that effect, Kathleen served a term on the board of Latinos in Finance, a diversity-based nonprofit dedicated to helping develop careers for Latinos either interested in or already employed in the financial services industry. Kathleen is also involved in ThirdACT, PBC, which provides debt-free financing for energy efficiency and seismic retrofitting for small commercial buildings, often servicing lower income neighborhoods with older delapidated buildings that do not have access to bank loans to improve their properties. Kathleen has a passion for helping underrepresented populations, LGBTQ, and working class people find satisfying careers, and improving their overall quality of life.

The NOVA Job Center will officially launch services on Monday, November 6th at the SparkPoint and Career Services Center (building 1, floor 2). Program registration, appointment booking and workshop schedules will be made available on launch day. As a NOVA Coordinator at the new Skyline College NOVA Job Center, Kathleen hopes to use her organizational skills and networking ability to connect with programs on campus, as well as non-profit organizations in our local region, in an effort to recruit students and community members who are seeking immediate employment assistance.

If you are interested in referring any job seeking students or community members to Velasquez, please contact her directly at velasquezk@smccd.edu or, please contact SparkPoint at 650-738-7035 or at Skylinesparkpoint@smccd.edu (Room 1-214).

Papers were selected for the conference in a competitive judging from abstracts submitted in July. Skyline College students started their research last spring with Christine Case in BIOL 230 or BIOL 695. The students spent the summer in the lab to continue and complete their research.

Stephen Fredricks worked with the students to register and prepare them for presenting at a national conference. At the conference, students were knowledgeable and professional, and represented Skyline College well.

Janah May Oclaman’s presentation of her research won the Undergraduate Microbiology Award.

Janah May Oclaman now has her first publication: Comparison and Characterization of the Soil Microbiomes of Delairea odorata and California Native Plants.

Robert Erickson and Anthony Petraki also was able to have his first publication: Microbial Metabolic Diversity in the North Pacific Ocean on the Central California Coast.

Robert and Janah transferred for the Fall 2017 semester: Robert is now at UC, Santa Cruz and Janah is at UC, Davis. 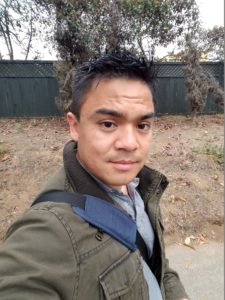 SparkPoint and Career Services at Skyline College would like to extend an official campus-wide introduction to a new member of the team, Henry Ta. Henry serves as one of our new adjunct NOVA Career Counselors here at Skyline College. Henry recently graduated from San Francisco State University’s Masters of Counseling Program in May 2017. His professional experience includes working in a DSPS program at a community college, various academic and career services at 4-year institutions including USF and SFSU, and the Tri-Cities One Stop Center in Ohlone College. Along with his counseling position at Skyline College, he is also currently working as a graduation specialist at SFSU – providing proactive academic advising services to high unit students who are close to graduating.

The NOVA Job Center will officially launch services on Monday, November 6 at the SparkPoint and Career Services Center (building 1, floor 2). Program registration, appointment booking and workshop schedules will be made available on launch day. As a Career Counselor at the new Skyline College NOVA Job Center, Henry hopes to use his expertise and passion to provide support and resources to students and community members who are seeking immediate employment. He knows that a part-time job or a career path with better pay can increase student success and overall economic security, which can lead to lifelong wellness.

If you are interested in referring any job seeking students or community members to Henry, please contact him directly at tah@smccd.edu or, please contact SparkPoint at 650-738-7035 or at Skylinesparkpoint@smccd.edu (Room 1-214) 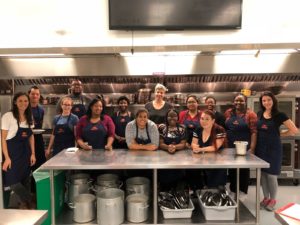 The SF Cooking Project’s mission is teach young people fundamental cooking skills by creating an inexpensive meal as a community, with the assistance of a local master chef. The GSP students not only learned how to make a meal from scratch, they learned how to poach eggs, a shortcut to cutting onions and how to create the perfectly round meatballs. The class was taught by cookbook author and Bay Area local, Jessica Battilana.

GSP student, Calvonnia Kelly commented on the experience stating she “appreciates the opportunity to help our Bay Area community while learning how to make easy meatballs that I’ll actually try to make at home!” By the end of the class, the students had helped to create meals for over 100 victims, and gained the skills to make a new dish for themselves and their family. Due to their volunteer efforts, the GSP program was invited to be an official nonprofit partner with the SF Cooking Project for a monthly cooking series.

The Guardian Scholars Program supports current and former foster youth at Skyline College. If you’d like to learn more or donate to their scholarship fund, please visit their website at, skylinecollege.edu/guardianscholars/ 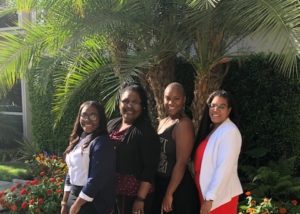 The Blueprint Conference is a dynamic two-day event that includes Guardian Scholars Programs, Social Workers and more from around the country. This event allowed for over 750 individuals to network and attend workshops that address foster youth in higher education. The conference combined meaningful engagement opportunities with in-depth workshops presented by professionals with a passion and aptitude for supporting foster youth to achieve their higher education goals.

The GSP team presented on “Sky’s the Limit: Creating a Foster Youth Support Program to Cultivate Resiliency”. This workshop is designed to assist foster youth support programs who are in their first two years on a college campus, as well as, provide strategies to bolster retention and participation in the program. For more on the GSP presentation visit: http://blueprintconference.org/.

Article and photo by: Linda Allen 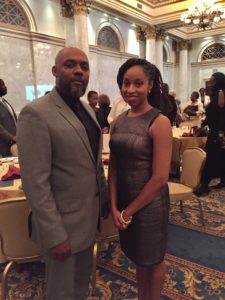 The National Council on Black American Affairs (NCBAA) believes in the development of full human potential, encourages lifelong learning for all people and acknowledges the worth of the individual. They also believe in the power of unity and the influence of the collective voice of NCBAA across community college campuses and supporting state legislature where African American students, staff, and faculty concerns need to be addressed at a more global level. The Dr. Carolyn Grubbs-Williams Institute prepares African Americans in community colleges for leadership roles to insure that the pipeline to executive level positions is fluid. 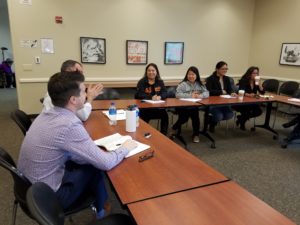 On October 17, 18, and 19 the technology redesign work kicked off with consultants from Kennedy & Company beginning their discovery phase by visiting all three campuses and the district office. During their initial visit they met with various groups including students, faculty, staff, admissions, financial aid, counseling, student services, administration, and chancellor’s cabinet. However, there will be more engagement points throughout project that will include in-person interviews, focus groups, task force meetings, and leadership meetings.

The consultant work will take approximately five to six months to complete, which will include discovery, design (software vendor review), and final recommendations. The plan is to start implementing the first pieces of technology by fall 2018, with full implementation of all tools by fall 2020. 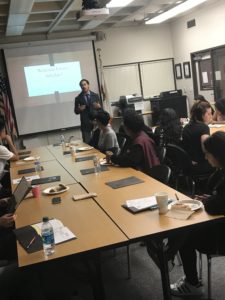 The Grove Scholarship program awarded 25 new and continuing Career and Technical Education (CTE) scholars for the Fall 2017 semester. Recipients were selected on a competitive basis among approximately 70 applications from diverse academic programs.

On October 6, 2017 the selected students met in the Career Services Center to complete the Grove Scholarship orientation. The orientation gave participants an overview of the expectations for the Grove Scholars Program which include: the maintenance of a 75% completion rate, 2.0 GPA, enrollment in at least 1 CTE course, financial workshop attendance and participation in the student Awards Ceremony. The orientation additionally, highlighted SparkPoint Center services such as: benefits access, personal financial appointments available for budgeting, savings, credit, food pantry, and Career Center services. A celebratory lunch was served to congratulate recipients.

Grove scholarships are funded by a generous $125,000 grant from the Grove Foundation eponymously named after Andy Grove, a founder of Intel Group Corporation. Each scholarship is worth up to $2,000 per semester and $4,000 of funding per school year per eligible participant.

Please forward any questions regarding the Grove Scholarship program to Andrea Doffoney Anyanwu at anyanwua@smccd.edu, or to grovescholar@smccd.edu.

Article by Andrea Doffoney Anyanwu and photos by Brynn Harlow